Eight hours with nothing to do at Los Angeles International Airport. No bomb threat theatre to watch. No art displays to mosey through. Nothing more than waiting in transit. Heat brings it on with humidity close to mop. Walking up and down the terminals lasts a half hour before the bus ride takes over. Eleven minutes away, the lug of sign-free roads and ambiguous traffic lights makes way to a bus rank. Mill about with pantsless individuals looking for a trip downtown.

Pay the fare and block the way, onward and outward toward Fox Hills Westfield in Los Angeles. Streets and shop fronts on the journey all dead and empty. Faces of the people down the chute of the bus looking ripe with that stench of suburbia under a flight path. Tackle the curbs and street corners in the middle of the day without the joy of pulling along a 17 kilo suitcase and that's a difference on a sight-seeing whim.

On a mission nevertheless, the pointless walk to a dismal place finds finding a phone card the reason of letting stride loose among the locals of the area. Cooling off in the middle of the vacant lot that is Westfields, the service desk sleeps a middle aged man, round and hugging all sides of the chair. A swivel unrest no party to this mob. Yonder walks and quiet steps, a tobacconist sees out a handful of scratchies and a couple scratching at imaginary spiders. Locusts are hard to come by this time of year.

Ask the question. Inspect the goods. Pay the cash. Exit the store. 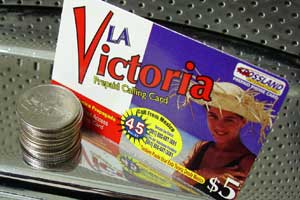 Another prepaid phone card under thumb, but this time with adventure under the nails.
And a constant look over the shoulder.

Three dollars for the bus fare and the price on the cover of this card to avoid the scam vending machines at the airport. That and the food in the food court courts many strangers at the ding of the lunch hour. Still, every store and shop is otherwise a ghost field despite the mawing throng on level 1. Or level 2. Lifts are broken in their logic of skipping the ground floor. Matters not, it's a foreign land where the peoples speak of "American" English, half of everything is in Spanish and colours have no hues.

Cheapest calling card from the array is LA Victoria, from Krossland International. Or Locus Telecom. Who knows. Either way, it's the one with teeth and a full brim sunhat. Half the card is in Spanish, which, if word pairs are anything to go by, makes for a simplistic and on the road way of learn a few choice words in another language.

Wasteful as a glossy card, not exactly one of the easier things to recycle. Punch it out or leave it in, doesn't matter or affect the quality of the call itself. Only the size of the squeeze down the slims of the place where the folding monies be held.

Like other phone cards, but not all, the call into the relay point is a free call with every call made from the payphone docking a fraction, large, off the total. End point is to not make calls with phone cards lest the promise land of 1000 minutes dissolves into 10 minutes and an upset operator clamours for more quarters. Information desk serves no help, and even making use of the phone for interstate calls frightens the pamphlets into flyers.

Quality of voice is shot with the din of the nearby—adjacent—service passage fwoomping every other word into the ether. Extension of calls last a trite longer, only a few minutes more, and the warning calculations of remaining coin are never accurate to any degree. Saving grace is repeating the fine print of losing half the value in administration fees by the very nature of making the calls from the public space.