The Axis of Awesome - Comedy Off Broadway

The difference between a cockroach and a guitar pick splashing in grapefruit juice is hard to split. Of all the drinks in all the comedy clubs in all the States, this Australian comedy band from Sydney ends up washing their pick in this one.

The Axis of Awesome are Jordan Raskopoulos, Lee Naimo and Benny Davis. All the way in the Blue Grass, they're without the usual flares, flames, ostrich steeds and sea horses bathed in bloody corn syrup. They make do and transplant the idea and pyrotechnics of their stage spectacular into the small stage extravaganza.

Starting as an aside, an online fan sketch of the comedy band as three dragons derails their intro script. The banter is light and not without interband distractions getting into the segue of each song. There is no framing device beyond the new awareness brigade and the times of falling off the tracks are as good as when they're on their lines.

Jordan and Lee hammer the short jokes on Benny and over the night craftily turn the audience in on themselves. From the outright total lack of, toward a glint of sympathy, they take the long running gag, make it eat its own tail and vomit out an empathetic pig's ear. A brilliant exam and evolution of social conditioning.

The breakdown of the typical boy band heart squeeze ballad, "How to Write A Love Song" is ribald and serves to outline their take and ability to read through the morass of such syrup. A classy pants-slightly-unzipped affair follows with "Sexual Harassment" to take the seedy night into a full-faced section of laughter. 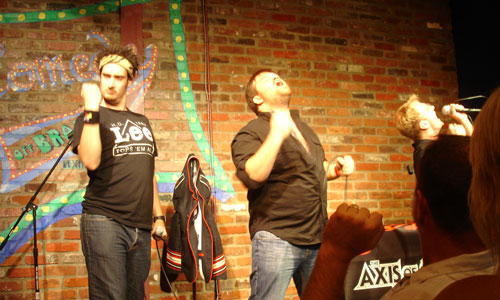 
Plugs for their upcoming album, Animal Vehicle are here and there while Scissors, Paper, ROCK! is gearing up for the after show. Songs about Batman and "songs you can (almost) sing along too" aren't on their upcoming Animal Vehicle (it'd be rather incomprehensible for the latter at least) but is a nice extra of not-even-on-the-album material.

Their deconstructionist medley, "Four Chords Song," a patchwork examination on the basic chord structure of popular songs now rides its own momentum. Kicking against the inertia, Jordan and Lee smash Benny's attention and composure with a little impromptu mocking that sets the keyboard to pause in order to catch a breather at being caught off-guard.

After teasing the audience all night long with the KFC song it drops as the night's encore performance. "We were just standing over to the side, really." It hits and it's a ripper riffing on the rhythms and bass lines of Kanye West's "Gold Digger," Beastie Boys' "Intergalactic" and the children's alphabet song among crunk, hip hop and others. "All the trainees! Making gravy! / All the trainees! Making gravy!"

A notable, energetic and absolutely shameless work in the making of the Colonel's signature greasy bucket contents. The "Chicken! Chicken! Chicken!" delivery in a tone of Busta Rhymes crams down a breaded thigh and lacerates the throat. It's the kind of raucous material the whole night swims in.

The Axis of Awesome are a smart, funny and acutely aware presence. Song structures and lyrics stand no chance as they pull apart the pieces in a way that their building back up creates a genuinely hilarious night of comedy airs.

Bruising the coccyx on hard slung chairs during the 21:45 set on 25 June 2011 with a cracked CD case to swap out at the aftershow signing. You're not getting your pick back, Lee.