Flying a Bombardier crunches in the sight of a small jet plane with quaint propellers on each wing necessary to lift a hulk of metal into the clouds. Not always the same sight as sound and that's the type of article found in the magazine sitting in back of the seat pockets along with the CRJ200 planes.

SkyWest from Go! Publications fills up some dead air time for regional United Airlines flights. Where all the seats are first class and economy rolling as one and everybody jams in their carry-on into the overhead because it's always too tight to take anything other than used blankets.

At least the seats are hardly ever crowded.

Travel writing has a certain blandness to it. Void of life and voice, it's a style that lists and details in a real estate timbre. Nothing calls out the bad, it's all good and glossy showing up with jazz hands.

Here then, an entire magazine in just that methodic drone. 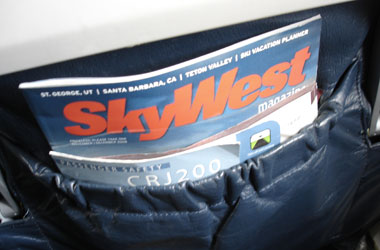 a copy of SkyWest in its native habitat

Quite the dearth of such writing in SkyWest, serving itself primarily as a where-to-travel guide rather than socking information wide into your cortex.

Everything is scenic and host to the history of some middle of the United States region. Focusing on three states at a time, the fluff pieces pimp out and highlight a heavy advertorial spin. Cabins and hotels are the mainstays of the pages shilling for coin and credit cards between the two.

Events and the local attractions are the shiny points in the dull gloss of a 30 minute kill. Published bi-monthly, the happenings and events are always half-and-half up to date and already gone. Unless you happen to fly when they've just been stocked with the newest issue.

Read one through on a flight hopping from the Chicago O'Hare hub, which times it right to realise that if you're up in the air that long without stopping by to see the flavour of all that the exhaust is dumping on, you're missing out something.

And just wouldn't you know it, all the places that ever appear in the magazine are right on one of the many regional routes these planes fly along. If you lived here, you'd be flying home by now.

The glue spines on previous years thin out to saddle staple and don't lose much for it. It's still as ever as plastic as the sheen that isn't afraid of keeping all eyes away from any nasty show.

When the drinks come around, ask for milk or tomato juice.