Skulled under cover of hair usually left unshaven, a pinkish-to-red welt sits just left on top of the scalp. Sitting below the skin on the left shoulder, a scarlet spider. An ear lobe split, now healed. Broken skin rips the fists with spotted crimson remnants. One hit the left leg, as two stained the right and a mark makes itself home on the left pectoral. Topping it all off, a glorious spatter of six shot dead on the back. Breathing deep is hard, moving in any direction or steam proving to be even more of a challenge.

"Pain is just a state of mind."

Early morning Sunday, on dirt road corners of Annangrove and Edwards in Rouse Hill, cars pulled up into a lot hidden by scarcely there road signs. Missing one and then almost another sign, the site of the day's carnage unveiled itself with a man ushering cars close to the registration shack. Faces familiar and not so were in tow, ready to throw down for some paintball fun organised. Introductions were fleeting, knowing the names of people to appear at the other end of the gun not the primary worry. 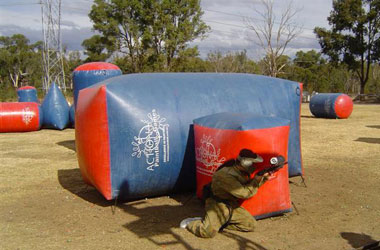 Seconds before the sneak attack

Lined up on the counter, various packages and guns with such names as The Sniper, The Devastator and The Terminator. Moving from one end of the counter toward the T2 arcade machine, the demonstrator worked the bloodthirsty on the display of better guns and their higher prices. Shifting from one package onto the next brought mentions of straighter and longer aims, more ammunition in the belt and hairier triggers. The wall brought out the biggest reaction and with the way the showcase was running, a basement armoury was expected, but not forth coming. Excitement built, the man behind the counter tried to capitalise on the salivating by noting the economics of upgrading guns with their added bullets before the rampage. Few took up the offer with the rest already planning to buy in massive bulk later on.

Crammed into every spare panel around the inside of the shack, the pro shop is littered with paintball and skirmish related paraphernalia and products such as DVDs, equipment and clothes. Change rooms are tight, guys bumping into each other trying to comply with removing their shoes as they suit up. The camo gear, snug for some, loose for others, one size should fit all. Goggles are tight, pinch and alive with the sweat of previous combatants. Running through the safety and rules of play, BMX guy pointed out the dangers of wandering around near the field of play without the necessary goggles. A blown eye socket on a dummy's head reminder for those passing through the heavy held door curtains onto the shooting range.

Brennan (another referee might have called out Brendon) served as guide and referee. Taking the group from one game to another he served to make those not familiar with shooting at their compadres somewhat at ease with their cocked barrels. Enthusiasm for the sport was palpable, his touch with the weed killer dispensing unit shooting water taking much charm in washing off the many, many head shots sustained by one and all. Charged, amped and off the meter, this guy was extremely contagious.

Scenarios progress from one intensity and terrain to another proving a varied mix for the gunners. Fallen branches and dangerously loose rocks litter Capture the Flag and the General's Men. Gallipoli introduces an infinity rule and a steep climb for the Aussies against the Turks bunked in their hold atop the hill. Games worked around their obstacles, vests and flags often reappeared from one round to another with slightly different powers and aims. Even though games are played with limited props such as an Australian flag or a jacket, the terrain and obstacles are dressed with stories to drive the run.

Noon brings lunch, a grilled affair of burgers using meat of slain poultry and bovine. Buns in baskets, sliced open and topped with sesame seeds filled themselves with a slight crunch and light air. Simple knives jut out from yellow in a tub resembling margarine or butter. No signs of discarded packaging or labels making the call hard to nail. The patties are hearty chunks of meat in either chicken of cow bash. 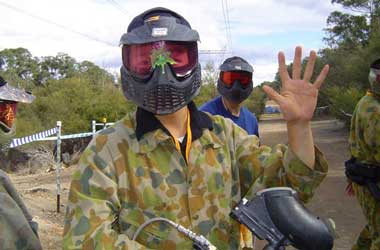 Shot in the front, Brennan in the back

The staff at Action Paintball, nutty as a one or two seemed, were extremely friendly professionals keen on watching the killing spirit rise from the participants. Even as the day wore on and the group limping and bleeding from too many shots in sensitive areas, the referee's energy served to refuel keeping the games alive and bodies counting. At least until they all went running to the dead zone on the final scenario, the free-for-all.

Three days on and the wear from a few hours of skirmish still burns heavy on muscles not stretched or indeed, even expecting to stand in hails of paintballs from less than six metres away.

Kill them all and don't get shot, remember: it's just a game.