Temperate, the sweat glands notch up a few rings in the rather warm morning with the jugglers convention paying company to the Australian National Yo-Yo championships on a day like 28 January 2008. Everybody wears short sleeves in weather such as this. Most everybody sane and in touch with their skin's reaction to dying off in heat such as this. Others favour dehydration. They don't talk much to people.

Boxes and the organisers make their last minute traipse into the arena, the Sydney Church of England Girls Grammar School on Forbes Street in Darlinghurst. The sink leaves a wide view for the activities for the day. Down beneath, a table of juggling toys like tenpins and diablos with the jugglers just a step beyond the table and large in the gymnasium below. On the otherside of a curtain of vinyl and netting, eli hops, brain twisters and rollercoasters warm-up.

Security guard on weekend duty reads the paper and stares quietly into a corner of bricks. Not once raising a single eye above the paper's edge. Too much noise from the strange people throwing things into the air and balancing little other things on dings of string. 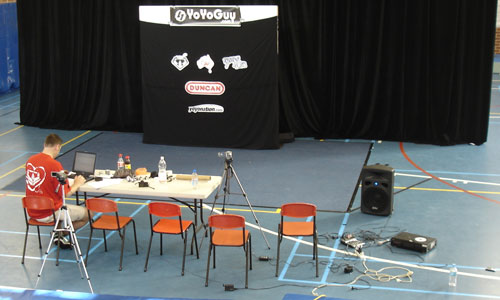 Where the magic happens is a short carpeted area

Judges strap down gaffa tape along the floor, marking out areas of points and throw practise. The stands are set with competitors jostling away and about, now catching the action, now catching up with interstate comrades. Friendly to no end, another hand passes into a shake and the community here is close-knit, kind and open.

On with the competition and show down through a distinct waft of talcum powder in the air. Of people turning tricks outside the bounds of street corners and velvet robes. Masters and what in the skill and sight of sleight. Yo-yos at the ready and judges at the panel.

Processing meat through the preliminaries, players line up and cattle call their skill in the face of the sports ladder. Coax and goad work the magic on a few reluctants. Easy up for all walking the dog and a couple find a dizzy baby their exit. Levels play out with the tricky set hitting hard on the scoring sheets past the lindy loop (double-on trapeze). Relaxing here is all about getting into the kick and rhythm for the rest of the competition.

Scatterbots on the field, the last of the sports ladder comes and goes with the opening session a rough patch on movement. No matter, a break and the judges disband to convene later for the 1A and Y division freestyles halving the rest of the day's competition. The wooden benches in the belly of SCEGGS Darlinghurst are something your backside is never wanting to get used to.

Mixing divisions, the 1A and Ys overlap with the official judging panel of Stuart Brown, David Quach and Soon Van barely moving from their table. The artists are refined, even if at first a few stumble syncing their soundtrack. They've worked on their patterns and flair. They know now how to better deliver a performance. Across the board they put on a good, entertaining show.

For a couple hours out of your day, it's worth watching.