Time and a Half

Double pass in hand for an advanced screening of 28 Days Later the house was left to the unringing tone of the phone. Plans were laid days previous to catch up with Norrin for the screening. The enslaved were on their way home and a ride on the train was made with an entertainment tabloid in one hand and a pen in the other. Talk on the station raised concerns on the dependability of what was probably a late running train. Things already started getting tight and air harder to breath from the light breezy chill.

Borrowing enough time to finish a crossword puzzle left a streaking bolt for the exit at Central Station only to hit a wall of people shuffling their feet. Frantic and unsure on the actual hours of business of the street mag on Cooper, a mad dash was made to the lobby just in time to be a few minutes late and nearly knocking over the receptionist on her way out. There to pick up a double pass for Pirates of the Caribbean for next week but found another pass for 28 Days Later in hand as she walked out the building. The door to the office of the publication was locked and no one answered the man holding down the buzzer. Two minutes later, a need for a phone call arose to let Norrin know he could bring along someone else.

A decision made earlier in the day to forgo the coins and carry only notes started to erode the buffer of time between collection and screening. Pay phones were all around but the notes weren't breaking. Merchants along the way on George were wary and antsy about changing a twenty dollar note without a purchase.

Rationally, the only conceivable solution was to buy a comicbook to score some change. Still unsure of the time things close in the City on a Monday night, a hastened pace was made for the nearest comic store streets away and lost in 20 minutes for the hills of the city streets. News had it that the new Street Fighter comic had hit the shelves.

There's actually no merit or dying crave to buy Street Fighter despite the massive hype the recent flogging of the limited print run of the comic scored after being snatched from the tables at the recent San Diego and Wizard World Conventions. But then who in their right mind would get Brian Michael Bendis to sign their rare white cover version of Ultimate Spider-Man #1? Someone looking for Mark Bagley and Art Thibert's autographs. 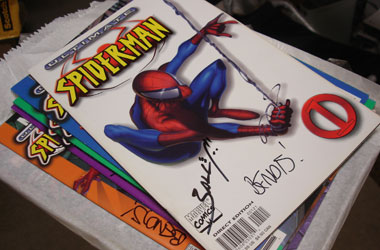 And a thousand cries are heard on sight of this photo

Hopes were high the store was open and that the comic was still in supply. Turning the corner, the back of the head of the fat bald man closing up shop dashed those hopes. Time on a bender and running down the drain, the store alongside had some high priced gum. Looking all around the shelf space yielded a blank result. Enquiring on the actual price saw the guy scan it. One dollar for ten pellets of alternative laxatives. It was the second to last chance before coming to the pay phones at Darling Harbour.

Reeling from the eye gouging, hustled to the pay phones next to the Entertainment Centre and close to a mechanical waterfall. With all the traffic of feet and cars hitting others along the way it seemed like the quietest option. For half the time anyway. The water cascades down along the side and shuts off just as soon on a timer. There must have been over thirty phones along the way around the middle of the city to get to those phones.

With remnants of change no smaller than a dollar, the first fell straight into the unforgiving lip of the phone. First call was to Norrin to let him know that he could bring another. It wasn't meant to be a check up, but that's what it was as he bailed with no reason standing.

That left three seats open and credit left in the bank. Credit that wouldn't fall down the change chute as the mechanism of public phones is unkind toward a full service. Skittishly reading the signs of the stand, the "Follow On" button was spotted and instructions to which salvation felt underhand. Mobile numbers went blank and a need was made to the small scrap paper lodged behind ID.

Dashed, the next went out to Jimmy. "Are you shitting me?" Either he couldn't or wouldn't. What was it? Time was blurred into unrecognisable figures and the time sounded like his journey was already planned.

Kang was called with no need to reference the paper and motion was heard between the fading in and out of the weakening signal. No dice. Probably stuck on the way home. A light brought up the name of Bryn who lived nearby. But the potentiality of a stalking case halted that motion.

The final call was placed to Belvedere. The first attempt was busy and the second dropped out before connecting. The third was on the last straw and a recorded voice answered. Frantic and having seen the last forty cents disappear into a message bank the keypad suffered a few fists to hear the woman say "The number you have entered, 4, will be displayed..." Timeout, and the two dollars and final twenty seconds were gone and no one was left to show for it.

With an hour before the screen lit up with the dead a canvassing of the faces of Darling Harbour was made. Sleazy felt like a charm and the passersby were given a quick glance on the way to sliding across the smooth tiles of the Town Hall walk. Save the Children had set up three people to harass the homecoming commuters. Fleeting was the thought of offering them as they chose not to waste their time on a freelancer. Their attitude baffling as they were only willing to talk to those who didn't want to listen.

Clocks were ticking over and scouting Pitt Street looking for the homeless guy asking for God wound up in a crowd surrounding the corner of the QVB. Elbows went flying and faces darted back like dominoes. The surfeit of bodies and cars helped in the getaway. A getaway which ended up at the counter of the Subway at the Greater Union Hoyts Village complex. Standing in line, the man on the right looked ready to pay for a bottle of Lift only to beat off for The Italian Job and without a bottle of yellow fizz. But not without being offered to watch 28 Days Later. Notes, coins and ID were rife and in a near creasing mangle. The results of fishing through the bulge in the pocket to pay for the sandwich was met with rejection on noting that the five dollar bill had cracked in two pieces.

Halfway through the first six inches of the foot long meatball on parmesan at Subway, a swallow was turned toward the couple on the table adjacent. Accents from Canada and backpacks to suggest the travelling type. Forcing a hand of interruption they seemed and sounded like "good folk" to offer the extra pass. After all, they were Canadian. They were ready to watch another movie they'd just paid for. But after a short discussion the male managed a refund for their tickets from the box office and they were on their way to 28 Days Later. Awkward silence permeated the air amongst the three when the deal was finalised.

On choosing to eat the rest of the sub instead of packing it in tight in the pants for the end of the movie, a face was spotted to a feeling of inappropriate familiarity. The kind of face you recognise and almost think to know the name of only to come unstuck in the fact that the meatball is rolling across the table and a quick hand stops it centimetres from dropping into the backpack of the Canadian backpackers.

Twenty minutes spent waiting in the lobby of the cinema.