Smoking another cigarette underneath the bleachers, a burly man in red pants and suspenders looks on to the bowels of the dirt pit. Two old wrestlers going at it with a crowd in the stands kicking up an orange dust. The squared circle bounces around the sound of throwing a guy's foot into the punch. The smoker is Rowdy Red, a wrestler on the circuit and hanging in the shadows trying to "pick up some notes on how they move" and work out some counters.

An interview starts with an introduction, maybe even a hello. When you're passing through while working a booth for a no-kill shelter, you end up standing near a guy in a colourful outfit and lobbing questions to see how far you can tease answers. That any come back is close enough to call it cordial. That it keeps happening is almost legitimate.

The tractor pull is dead and done. Thick black smog from the exhausts give way to the night and once again to the sounds of a dunk tank clown berating a kid on his weight, his face and the way he smells. You can taste the silt on your tongue at the Clinton County Fair. Just like any other county fair that sells a spool of flour coated in powdered sugar for five dollars.

First of the wrestling matches features an old man taking on someone about 15 years his junior. And even then they both look tired in sweat, ready to cash in their 20 minutes on the mat for another day.

Back at the bleachers and watching on, Red continues answering. There is more than an arm's length between, and no one's facing the other. Off to check with the booth and then back again and the man is still there. When he's not, he soon returns. So the questions keep coming. 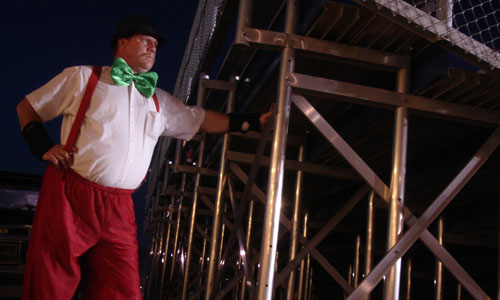 Suited up and ready to throw down

Neck fused (twice), bones broken, all the usual bruises and injuries. By day, working the chain at McDonald's. By the crook hook of night, he's chasing up reimbursement dockets and receipts and putting that odometer into another click as a small time wrestler. The day job allows him time away to do this. They're understanding and cooperative, he says.

Both the interviewer and subject leave for a bit, and then come back again, standing a little farther apart, still within earshot.

Given the choice between indoor and outdoor events he'd rather the open air arena so as to feel the breeze. There is no breeze tonight. Just a warm stale air and a dust that's drying up after the fire trucks hosed them down hours earlier.

Red has a small notebook of all the dates on the circuit. He's been chasing it for the last 27 years, with plans to tap out when he himself hits his 50th birthday.

Another drag, another stub.

Rowdy runs off to grab his signature green bow tie, a prop the size of a two fanned out hands. It's time to strut the mat and wrestle. The bow tie and the red hat are not on for long after the ding of the bell as sweat rains down upon his shirt. The face happens to look like Cody Underwood, the pyrotechnics expert from Tropic Thunder.

Red blasts the crowd, "Don't call me Opie!" and they naturally throw it back at him. Pressed earlier about taking a fall he skirts the question and says he wants to give the crowd a show.

The ref spends all of his time socialising with the crowd. Rowdy then has the chance to loosen his wrist straps, used to choke his opponent. Two wrist straps, coming apart at the wrap and the game goes into full pantomime mode. It's a throwback of villainous means. Before adding his litres of sweat to the wrestling mat as a fighter, he was a performer in the stripes. As a ref handing out brass knuckles to heels. That didn't last long.

They tussle and slap each other around. The face drops the heel from the ropes onto his back. They both try and choke the other with the ropes. Rowdy Red loses in the allotted 20 minutes after flying out of the ring. The face laps up the autographs, kids clamouring for a whiff of his musk. The heel stumbles off quietly, picking up his hat and bow tie. He looks back into the ring, the announcer's table, and then continues the path out.

Rowdy Red is on the other side of the field now, watching as a few more wrestlers match up. More boos, more applause. The main event. The shinier one with the more toned pecs wins handsomely. The crowd vomits their adulation.

The wrestlers towel off and leave. The crew break down the ring and load it back into the truck. The no-kill shelter booth packs up and stows away its games. The lights go out.

Watch Mickey Rourke slog through the ring as Randy "The Ram" Robinson in The Wrestler. The years have not been kind, and the ring has no health benefits, but it's a small way to make some money and fame. Also stars Marisa Tomei, directed by Darren Aronofsky.

Or read about The Total Package in Wrestling with the Devil: The True Story of a World Champion Professional Wrestler - His Reign, Ruin, and Redemption by Lex Luger. A party and champ out front, a mess of sex, drugs and alcohol out back.

And then there's The Squared Circle: Life, Death, and Professional Wrestling by David Shoemaker. A look at the history of wrestling, its fans and the cultural impact its had.