Smell the fresh country air from inside the car interior. Nice warm breeze of sightseeing in south central Kentucky of the US. Take a point to the compass and a pull grabs at the hips thanks to the most extensive cave system in the world. Right there in blue grass horse hoofing country. Where poultry learn first hand of the terror down from the grin of a Colonel and his eleven secret herbs and spices.

Thanks to the wife, travel time is relaxing and near non-existent. Eyes close for a little nap and open again on the sound of a smack across the visor. Two hours from the start out west of Kentucky evaporate cleanly while spotting signs and birds through the trees. Time aplenty for eyeballs to readjust to the light of the dashboard lapping up the endless trees lining the roads. Tailing and turning from the main and into the woods. Closer and closer toward Mammoth Cave National Park. 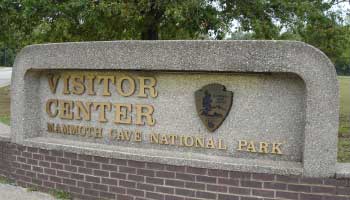 Central time picks daylight from a broken clock and a wristwatch that tells only how many times Micky Mouse needs to stop scratching himself. Watching for the grass, thar be bushels of stools and samples from the local wildlife. Soft. Nothing from the other visitors. Facilities with porcelain makings covering well into the sink holes and wash basins. Loud PA systems beckon from the outside with those clenching turtles on with enough lead time to cover five minutes of the fold or scrunch debate. Anywhere on the park, that's enough notice to wipe the dribble and get in line, tickets in hand. 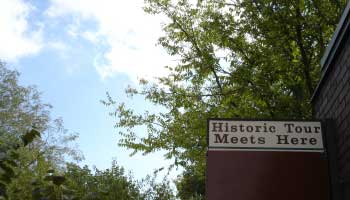 The Historic Tour takes the day and cash that folds. Least of those bearing Hamiltons and beyond. Warm clothing, the guide warns, is the thing to bear down there in the dark underground. Small hiya introductions from the group shoot out shout outs from places as far as Australia and Germany. Even San Francisco represents.

Background on the caves and their discovery, loss and rediscovery fill the greens of the entrance and exit hole before the tour undergoes the underground. Official Kentucky humour from the wide brim hats and the chuckles are there with an EMT in the crowd. Thank you for piping up. Jokes fall flatter with awkward asides. And away we go.

Park rangers double team to guide the tour. One in front with the lights on; one in rear to switch them off. Straggling group of inmates take up the fall back; all the other tourists and pedestrian spelunkers bunch up the front.

Temperature drops quick on crossing over the twilight zone. Subterranean nature walk getting chilly with each step away from the light of day. Lines of ants breathing easier as humidity takes a back seat as the sun takes a break from facing people going close to the centre of the Earth.

With at least a century under the belt, wood, artifacts, bones, whatever and ever remain as fresh in time as Captain America before the meddling Avengers crack open a certain slab of ice. Pooling around the excavation work, all the live bodies note the lack of dead bodies, of skeletons lazing about long after the job. 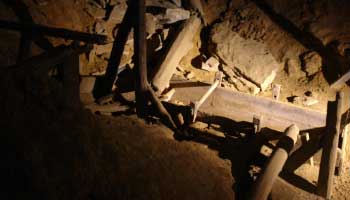 No workers. Must be on strike. Or dead for decades.

Slabs of wood and lumber once under the use of the excavators and miners stripping the caves of its limestones remain pristine, unbroke. Decades into at least a century right there in the hole. Capture of the state bleeds over into graffiti clinging along the caves. Previous guides, way back in the days of buckshots and open slavery, charging nickel and dimes of freedom for the privielge to the tourists. No such thing nowadays. All hands off the merchandise and stalactites thank you kindly.

Heads and knees turn purple and soft bruising down Fat Man's Misery linking into Tall Man's Misery. Other names and labels of sections and passageways sticker themselves aptly in the guidebook. Handy in daylight, near useless looking for the tour guides to follow from down in the labyrinth. Reading material for the bats they say. And edible from the corners in. 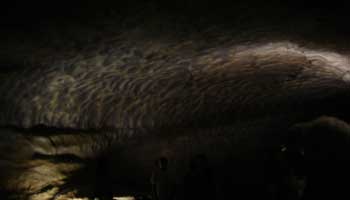 Lowest point in the tour before heading back up narrow stairs on the right. Toward the River Styx, the cold and dark trail teeters closer still with proximity making a line into the core of the Earth. Being a bible state, the eerie lurkings of the devil pop up in mention. Closeness of the tunnel toward a hell down there what gives it a gleaming echo.

Taking a breather on rickety wooden benches, lungs inhale in as much as the dead and stale cave air around. Can't get any more unfiltered and undone by motor exhaust than miles below the Earth's surface.

More history on the caves unfolds as the group give their muscles a rest. Links and carvings of the rock walls, outside the graffiti, a natural by-product of the waters carving their own niche and streams. Beyond the entrance, all thanks to the slow centuries burning of gentle erosion.

Around the landing, all behold, a towering staircase. Easy as the walk down into the bottom of the pits is, now comes the return to the surface. Open with a fantastic, if at times obscured view around, the faces face butts climbing up the staircase. Steep in angle, condensation on the metal steps make for gingerly ascension. Move too much too quick and the entire group behind may domino all the way to the base of the tower. 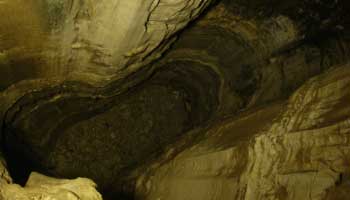 Drop a penny, lose a penny

Crossing a chasm after the tower, holes and interior canyons shake the waters off the grates holding the many visitors pounding and stomping across the bridge. Looking down into the darkness below, drips of water pass along and disappear. Barely with a sound. To the other side and the journey upward to light continues.

Not helping matters still, remaining sections of the cave system slightly slick with wet prints. Tender rock faces jut out to meet and match, liable to fracture or gash if falls send their victims grabbing blindly and wildy along the walls. No handles or rails in most parts. Grooves in the paths enough to signal where to step the next foot.

Natural view of the interior

Pausing along the way, out go the lights. Nothing remains in front or behind. Eyes useless with whispers of sounds making the rounds. Hands on wallets, paper or leather. Teasing into the abyss standing still, the lights flicker back on. Part of the tour, feeling the essence of the cave alone. Save for the triple dozen strong throng of other visitors to the park on this, their collective peripatetic part of the day. 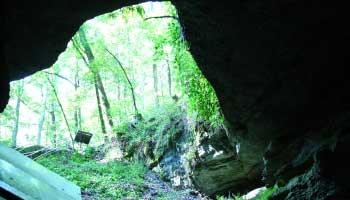 Entrance and exit of Mammoth Caves

Mammoth Cave. One monster connective tissue of holes and not enough time to get lost in. After two hours in the dark, the break of daylight, sunlight in natural light, scratches across the pupils.

Debriefing outside the lip, with another group ready to descend, a large branch falls from on high barely missing two blokes.