The Hunt all began some weeks ago, possibly enough to constitute a month. I fixed my gaze onto a blonde wall of hair. The situation surrounding it was that of a survey or workshop of sorts about the decline of quality of the educational atmosphere. Butcher's paper was strewn across all of the tables save the one in the back of the room with cakes, cups and those little sandwiches that are cut up into triangles.

As graduation was only weeks away I wasn't overly concerned about the whole ordeal or the chance to air my grievances and complaints about the state of time I had spent the most - couldn't say better - part of the last three and a half years. During the two-hour period a couple of shady characters where seen hovering over the table in the corner and fondling the food. Luckily I wasn't going to eat anything else having already taken my fill of the freebies. For some reason a baby tomato was skewered on a toothpick through a choice few of the sample. The mustard on these targets were seedy and looking to do some hurt.

There was rotation and movement about the room and on the edge of the two hours each of the participants were given book vouchers. Book vouchers, as the truth is known, are pieces of paper like money, only limited in power. For days on end the voucher lay hidden in plain sight beneath a film of either rock dust or moth dust; it's hard to tell when it all feels the same. It was optimistic on the outlook and operational future of the bookstore from whence it was borne, as there was no date of expiration.

For as long as the store would remain solvent the voucher would be valid. Big call given the history of such other retailers known to have gone belly up with the influx of redeemable vouchers. A call was to be made, and the voucher was there to place that call. The line was to be traced and it was only a matter of time before it was hung up. But time was no factor in the game of things; it was an untimed call.

For the uninitiated, Hunter S. Thompson was a leading edge journalist back in the 70's who didn't conform to the usual bland state and way of reporting that was - and for the most part is - the norm. "Gonzo Journalism" was the label given to the unique and striking style pioneered by Thompson. Sure, there has been an innumerable slew of imitators but none come close to the lucidity and ferocity known in his words. It was in conversations earlier in the year with a Jimmy Weasel that I knew just who the call was being made to.

As was briefed, a book voucher is only valid in the store it was made for. In this case, Angus and Robertson. With the city being home to three to the city it was.

The first store was underground, in the underbelly of the main, mean streets of the CBD. The selection of books was limited and small in range. The carpet was new, as was the store itself. Minutes were spent perusing the shelves, yet to no avail. Not a single sight of logic in the plan.

The next store was drenched in the smog of the busy high traffic of George Street. Much like the one next to the subway it was small, yet in this instance there was room to breath, customers and books alike. Yet, much like the first, it was limited in range. And there was no carpet. Hostile was the situation in this store. The bare bottom basement need only survive in this location.

But there was another one in store, of the stores. One in the Pitt Street Mall, so famous for being a haven for older men - and especially women - leering at - and offering contracts to - the potential young starlets of tomorrow's supermarket catalogue model tabloids. A team of youths with a boom box and no sign of cardboard had set up in the middle of the strip. They were finding it hard to break their dance. A spruiker next to a garbled speaker led the way down into the mouth of the third and largest of the Angus and Robertson Empire. I found it hard not to "kick it."

This final destination was the last in the line. The back of the store was a distance; it could have fitted in five of the previous stores easily. Reserved on the left wall from the entrance was fiction and new releases. Having examined the stock I found that I was already looking at the Ws without having spotted Thompson. He had to be in the store.

Taking my mind off the distraction I sauntered over to the section where there were a few in suits. Looking out of the part one of the workers approached me. The name on the tag might have been Guy or Dan. It consisted of discarded letters that found solace in each other. He could smell the absence of money in my socks. I asked him to show me the Fear and Loathing. He ran behind his little counter. I directed his gaze with a gesticulated, "Fear and Loathing in Las Vegas." Someone with a tie interrupted and asked the man behind the counter why the prices on the books climbed. "But we have a 20% off sale on all books today" came the response. I walked over to the crime novels. It was clear that this section could not help me.

A girl, about 5'8" in height with rusty blonde hair - whose name at the time just happened to be Trainee - looked a little like she was enjoying not really having to work at the bookstore. So, in my boredom and lack of trying to locate the book myself I asked her to take a look at the database and tell me whether or not Hunter was in the house. She asked me twice - much like the other guy back in the computer books - for the title I was after. They've got to have some impairment with their hearing, as I know I can't be wrong, I'm the customer after all.

Three times I repeated, "Fear and Loathing in Las Vegas." She bobbed her head like she knew what was going on then asked me surreptitiously, "Fear and?" Yeah, that's right, "Fear and Loathing." She then turned to the computer, stared at the keyboard as if it was about to hit itself over her head, and then slowly typed in "F-E-A-R-O-L" and hit enter. The only returns were that of a couple of titles that started with "Fear and Loathing..." She led only a few steps toward the literature section. Seems the guy in the back of the store knew nothing about where he was employed.

In terms of literature I've been an avid consumer of comicbooks for the past six years. As far as I was aware anything that is formed from the existence of text on paper constitutes 'literature.' But the bookstore isn't catalogued in such a way.

An entire shelf of the dubiously labelled "literature" section stocked Hunter S. Thompson. The books were new, but their print run was high. The Rum Diaries, Fear and Loathing in Las Vegas, and The Great Shark Hunt were just some of the titles resting on the space.

Of all of the works, The Great Shark Hunt felt the most voluminous, and with small type, looked to be the winning call in this race. The price on the back was $25. The voucher was $25. Kismet. A grey haired man at the sales counter, about 6 feet high and possibly gangly, looked like he had a sale on his hands, that was until I pulled out the voucher. The smile remained, albeit a little forced. 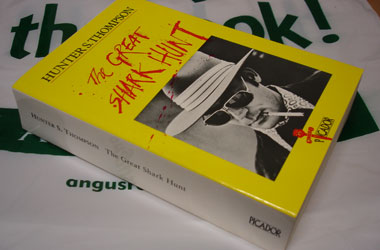 The Hunter has been captured

And then the call ended.

Yes, yes, this book was actually bought at the Pitt Street Angus & Robertson store in the city.
But, because their online store doesn't offer any kick backs to help us pay for the hosting costs, here then is an affiliate link to The Great Shark Hunt on Amazon.
If you buy the book, or anything else while you're on Amazon, we make some money off of your purchase and live on to pay for instant noodles another day!