Shock and Awe with the Sounds of Coma

As a person who rarely steps out of the house and listens even less to live music I thought it would be a great idea to conduct an interview with a rock band I'd heard so little about. In this case they were an outfit known as Sounds of Coma. Not wanting to gather any breath for researching the band I fired off an email to lead guitar and vocals, Petar Konakov to propose the deal. After a holiday the bait was taken.

With a few bare ideas in my head about who the band were the first dilemma was on how to kick start the interview. Naturally, being the collaborative effort that The Wax Conspiracy pretends to be, I stole a question from Belvedere's interview with Peabody's Bluto who borrowed that question from Jimmy's sheet prepared for some Swedish metal band. It didn't get used in those first instances so I thought I'd at least give it one more shot before being granted euthanasia. To start the festivities of electronic media, I posed the question, "So, Tobias, how cold is it over there?" With no Tobias in Sounds there was the fear that they might have thought me to be a fresh apricot. If they were stunned by that question the answer that Konakov shot back puzzled me "Randy gnawed the frostbite off my balls." Was it really that cold? A day's lapse in the question and answer in a bipolar period of the season suggested so. Things looked up and the world was down around our knees.

There's not much by way of background information on this outfit, mainly due to the fact that prior to their debut gig at the Harp a few months back, these guys didn't exist. Not as Sounds of Coma anyway. Previously they were known as One Ultimate Dose. The tangential metaphoric connection between imbibing that One Ultimate Dose to wind up around the Sounds of Coma pretty much mirrored that of the move of band mates Konakov and drummer, Randy Serrano. Like a bad acid trip where the realities are splicing off from one point with no discernable direction the sound of Dose spread the band and the feelings of Konakov and Serrano on that "we were a revolving door for anybody and everybody, the whores of Sydney" meant that when Dose folded in late 2001 they weren't going to revive that name.

In part it was also a question of creative sanity "it was necessary, OUD was always a time bomb, there was never any form of motivation to make us want to fight through our fights, if that makes any sense. We were going in different directions. Ashley wanted to mellow out, Randy wanted to get heavier and Carl and I were always butting heads. I didn't like where he wanted to take the music and vice versa. I was losing control of what I had envisioned the band would be so I said fuck this, I'm out, no more OUD. These days it's like coming from some big city where everything was fucked up and over blown and arriving in some cool little beach town in the middle of nowhere where everything is chilled out, simple and completely functioning the way you'd want it to, you have your minor set backs but they don't matter as much as they did in the city, these set backs don't burn you, you learn from them and you say cool, tomorrow we'll try again. Sounds Of Coma is our little town." 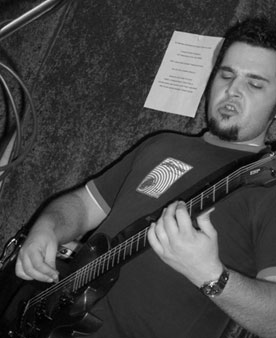 During his time at Dose, Konakov wrote songs on the side that fell under an umbrella that he dubbed "sounds of coma." With the implosion of Dose it presented the perfect time for the new sound in Konakov's heart to bleed out "so I kind of said to Randy, 'Hey how about we call ourselves Sounds of Coma, because I can't define this shit.'" And it's that indefinability of the actual sounds of coma that lead toward the name, "the only people who know are those in it, like us I guess."

All the planning and studio sessions in the world doesn't compare the to vampiric nature of playing in front of a live set. Especially when the audience haven't heard of your new name. So in July the band debuted at The Harp to an overwhelming reception, "We did not expect that kind of response, especially seeing as it was our first proper gig in 18 months. We played a warm up show a few weeks before as Not Weiland which nobody knew about so to get the crowd and response that we did, it kind of blew us away, I saw people nodding along to the old OUD songs that we played and getting into all the new Coma songs like Shock and Awe and Everything Handed Down. It was great."

Maybe there's no such thing as Happy Birthday, Inevitability, that's another matter. When Damian Cessario (bass) broke his arm the band sent out a call for a new guitarist. New blood to the line-up came with Matt Golubic and with him a sense of unexpected synergy. "I had all these ideas for our songs that needed that extra guitar, Matt came in and did it instantly. I never said a word to him. He is the missing link, the shit he has brought to the table in such a short amount of time is insane. He knew what we wanted without us having to say a word. We are in total awe of the things he can do and does."

Of the things other people can do I asked the man, knowing full well that I might not even know who they were, if there was anyone he'd like a chance to hook up with artistically, "I'd love to work with Scott. I could die the next day and it wouldn't matter cos I've worked with Scott. I want Scott Weiland to sign and produce us. He has vision man! I'd also love to work with Fiona Apple. I can see her piano all over a few of our songs. How cool would that be? Fuck, now I'm all fucked up fantasizing about it, and here comes DJ Shadow for the remix album! Sounds of Coma produced by Scott Weiland... that has a nice ring to it..."

Come the revolution and thy name be peer-to-peer networks and the file sharing that of late has managed to put those cash strapped 12-year-old girls in their place. "It's a mixed bag that one. It's good for exposure and if you get off on people liking your shit, which I totally get off on! If you want to make money from it, this is the wrong industry anyway so deal with it. I like downloading rare shit which you can't find in a store. I got some live Finch songs the other day. I can't get that anywhere else." Speaking of, freshly posted on mp3.com.au is Pristine and a few other songs from Sounds of Coma that you can download and get a taste of.

When Agatha Christie and Mary Shelley's Frankenstein made an appearance in the question set I knew that I was scrambling for things to ask these guys. Though it was apparent pretty early on that I was only talking to one man. Having no desire to seem self-important I didn't plan for any sort of direction. As such and being The Wax Conspiracy the last question I had was one about conspiracy theories which left me with this, "Marilyn Monroe? - the Kennedy's killed her, the Moon - nobody has been there. Basically, if America is doing good, peace keeping, what not, you better believe that what they're doing is really really fucked up. Why isn't Clinton in the Hague with Milosevic? Because a few stupid fucks signed an agreement that stated that no American soldier, general, whatever, could be tried for war crimes, fuckers. Viva La France, I love that country so much now cos they had the balls to tell America to fuck off. Oh and if any Americans read this, buy our shit, I don't hate you, only your fucked up government and their New World Order. Damn. now people are going to think I'm political. Well... I am so fuck it!"