Star City. Den of tacky food and a half-way house for souls bleeding mortgages on debts over loans and a constant food supply for shysters. Tuesday night is like any other; people staring deep into the felt of the craps tables and spins of the roulette wheel. Celebrations are on as ten years of taking the people's money roll by. Fireworks display outside as The Black Sorrows play in the food court they call Fortunes.

Elsewhere, at the Lightning Ridge Bar and the high rollers' room, cameras roll for a television series to screen later in the month on Channel Ten.

Original time for filming is 6.30pm and several mentions are made of this. Final invitations through the mail read as such. An extra note on top of the invite reads, "Please note that there has been a change of schedule on Tuesday 13th September. Your shoot time is now 6.30pm."

Hours prior on the day, the audience coordinator from Freehand TV calls up and says, "Your scheduled shoot time has moved to 8pm."

There are not enough seats for the people sitting in the area outside of the high rollers' room. Extra chairs are brought from behind a curtain and line the side of the set. They count and need four more than planning suggests. After a minute, everybody has a seat.

John Chapman-Fleming and Rusty Berther of the Scared Weird Little Guys, Lano and Woodley's Colin Lane and a man named Michael. These are "four of Australia's funniest comedians, out-witting and out-bluffing each other in a game of skill and strategy."

At least in this session.

Russell (Gilbert?) and Chris (Franklin?) are the two last names on the monitor from the previous sitting. Greg Fleet and Vince Sorrenti are nowhere in sight. Their appearance at such an outing a matter of pure speculation and weighting of probability. Most likely already having a throw down their cards at an earlier session.

Sleek geek Adam Spencer is hosting the series with an expert in the game by his side spitting out commentary. His name starts with Lee. There is no recollection on what the surname is. It's probably Nelson.

They ask to be here. They know the rules. And yet, with this in mind, they are unaware of their situation.

Before filming even begins, a group led by a man with tight greasy locks and too tight a top asks the audience coordinator, "Are we going to be here for two hours? Sitting here? Two hours? Is this it?" On receiving yet another confirmation outside the invitation and emails, they jump ship and run before Mr Vato Locos, the floor manager, knows what to do with the extra set of chairs brought out.

After the first segment, another man asks for kind permission in order for his group of six to leave. Exodus part deux. Reprimands come from the audience coordinator as the second group are out of earshot and out of frame. 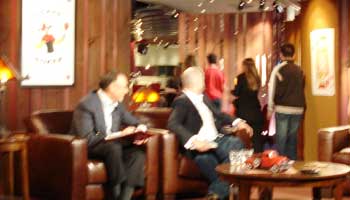 The first of the audience folds 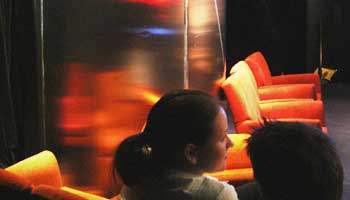 "I'm closing the doors on you, boy"

Two from The Wax Conspiracy (the other being Belvedere Jehosophat), a couple on what can only be a most horrid date and a woman on her third round as an audience member.

Shuffling of schedules all week long have come as a result of the games taking longer than expected. With the slow pace of players intent on delivering concentration not unlike shopping mall Chess players, two hours is hardly sufficient for their needs.

Rusty Berther is the first to go. Timid in betting, his last hand is done all in while played standing up. A futile gesture toward cunning as the man is already out the door before the others place their bets. The green and white cowboy packs his bags and steps into the lounge.

Given only five people in a sea of twenty seats, the applause is weak. 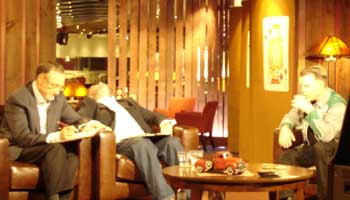 They know not to ask of this again.

"Blackjack" Fleming is a man who folds with extreme confidence. Even with a winning hand in the palm, the determination of his cast is strong. Winning tactics include standing away from the table on a weak hand to collect the entire pot and looking more perplexed and frightened as the game wears on. His eyes are in a constant state of fear.

Colin Lane is a player of repetition. So much so that as each time the pit boss ups the blind and increases the pot, he delivers the exact same line. Again and again. And again and again. Curses! And soon he is wiped out during a crossfire battle between Michael and Fleming. Lane is the second to join the empty seats in the audience.

Michael, the dark horse of the group with nothing notable to his name, is a man severely out of his element. Within the short span of two hours, the hairs on his head grey with a chilling intensity and speed. The stubble on his chin requires multiple shavings and his face bears the brunt of many years intensified into one night of no limit high stakes chip playing.

No rum? No rum and coke? No jokes!

A prominent Wild Turkey banner sits behind the comedians as they take to the couch. The vato locos of a floor manager informs Berther that drinking glasses must never be seen on camera in any other state than always full. Lane is told that there cannot be any volumes of alcohol sitting on the table. None. Not even the blink of vodka for the clear liquid of water. Or a drop of rum inside the coke. Nothing. Not even a bottle of Wild Turkey. 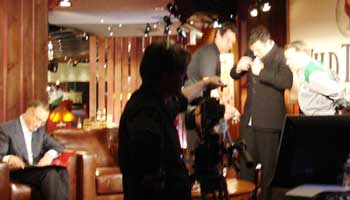 Even the crew wants out.

Lane seethes at this conundrum and stirs many questions on the whole set up of the event. Despite now the company of two comedians, laughs and jokes are thin, sparse, non-existent. The spare audience entertain themselves with their own observations as the pit boss continues walking on screen in search of something funny. Something close to hilarious. Some evidence, any evidence, of the players being comedians. Each time he is disappointed and as a result, ups the blind.

Mathematics can be subjectively moribund

Calculations on the percentage of a winning hand flashes as each player's cards are seen. Not all rounds are the same. Totals in one run up to 99%. Another round hits 101%. Star City are in for their take, out from the hands of the charities before they spoil the riches on those in need.

Breaking out the vocabulary, the expert drops both "moribund" and "nadir" into the conversation and commentary. Spencer counters with a rather canny use of "apogee." Unfortunately, the charm of observation is shattered as Spencer explains just how ingenious his use of "apogee" is against the "nadir" of the players' state of mind.

In search of emus

Fleming wins the night and collects a Wild Turkey trophy of cards, chips and a wooden leather case for his troubles. His charity of choice is the Fred Hollows Foundation. Blinds for the blind as they say. Spencer races off to present the prize as Nelson mutters about having to look for an animal. An emu, a red back spider, a wallaby and a platypus are mentioned. No shaking the snake. No draining of the lizard. 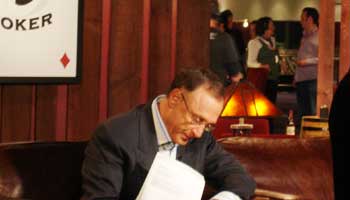 Apparently, Fleming's style of play reminds Nelson of an emu. Tall, gangly and running all over the place.

Soon as the cameras stop filming, the entire area clears out. Lane is out before the others in search of some hard liquor. Decks of playing cards are handed out to the audience members. Number of "bloke" jokes for the night: none. Number of jokes in total: none. At least from the billed comedians.

The Joker Poker episode as described in this account was originally screened by Channel Ten on 26 November 2005.