La Cucaracha is the brown-sounding album that Deaner promised quebec would be all those years ago. It's hard to tell whether Ween are sounding more manic than usual (or at least since Chocolate and Cheese) or whether it just seems like that because La Cucaracha, in terms of production, lacks the sheen of their previous few records.

Whichever way and for whatever reason, La Cucaracha is a diverse record, and one in which Ween hops between genres with their usual astounding ease. The woozy reggae of "The Fruit Man" comes instantly to mind, as does the weird bluegrass-ish "Learnin' to Love." The former, though perhaps this is a contentious statement, is the best song on the album.
It's safe to say that the strength of the record is in its eclectic nature. And it should come as no surprise, then, to find, saddled between the mawkish lullaby "Lullaby" and the lounge-pop "Your Party" (complete with cheesy sax), a ten-minute plus prog-rock guitar-solo freak-fest called "Woman and Man," whose trippy, new-age lyrics are a little reminiscent of that "Origin of Love" song from the Hediwg and the Angry Inch soundtrack.

There are a few weaker tracks on this album. "Friends," a dance song, made more tolerable because of a pretty vocal melody, probably could have stayed on The Friends EP, re-mixed or otherwise. Also, the first track, the instrumental, "Fiesta," seems more a statement of purpose, designed to herald in the "party record" that Deaner promised, than a song that you would actively sit down and make a point of listening to. These aren't missteps, however, or at least I'm not willing to declare them such, as it might be that, like a few of the other songs on La Cucaracha, they, with a bit more time and a few more listens, will come to find their place on the album.

Ultimately, La Cucaracha takes a little getting used to, particularly if you really came to appreciate the direction that the band took with White Pepper and quebec. However, with an open mind you'll find that La Cucaracha is not only a worthy, albeit dissimilar, successor to those two records, it's also another exciting chapter in the career of what is easily one of the world's best bands. No, hyperbole!

Being that most places are asking for just over twenty poems for this CD, you really can't go wrong. Enjoy, mang. Oh, and the Deaner-sung "Sweetheart in the Summer" is as sweet a song as anything else Ween has written. 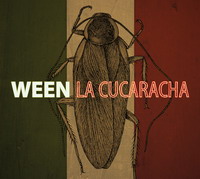