The Flaming Lips - The Soft Bulletin

The cover of Ween's White Pepper is predominately white, which, for the longest time, gave me the unshakable feeling that the songs contained therein where themselves predominately white.
For the longest time, that album sounded bland, and it wasn't until, after a few weeks of listening, I was able to discard those misconceptions and allow the nuances in the songs to paint their own palette and speak for themselves. I mention this only because the cover art of The Soft Bulletin is predominately blue and yellow and I can't shake the feeling that the music has only those two dimensions.
As such this review is a few weeks too early.

Incidentally, Dan, I got a bottle of bourbon at home and your name's all over it.

I bought this album on the strength of Race for the Prize, which, alone, is worth however much I paid for the entire CD. It really is an amazing song.
From what I'd read of The Flaming Lips, however, have a tendency to release singles that bear little resemblance to what's on the rest of the album, and this is certainly true in the case of this particular album.
There is nothing as immediately immediate as Race for the Prize save for, maybe, Waitin' for a Superman, which, I think, ended up being the second single anyway.

There are a lot of strings on this album, a lot of flourishes. I would go so far as to say that the album sounds lush, which makes me cringe because 'lush' often translates to 'bloated'.
However, the lushness has been tempered by pushing the drums into the forefront, which never allows the music to sound sluggish.

Wayne Coyne's vocals were once described as being wounded and I cannot think of a more appropriate description.
I think he recognises that the world is populated by a bunch of tired bored sad people living tired bored sad lives, and, that in absence of the weapons necessary to force any real change or of any real hope, the only thing anyone can really do is to hold on for dear life and try not to get overwhelmed.
His lyrics, then, are as much about offering hope as they are about describing this, for want of a better word, condition.

UP THE MIGHTY EELS!! 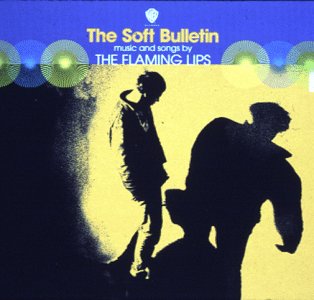 Also, there are two alternative mixes of Race for the Prize and Waitin' for a Superman on the album in which the drums are stripped of all their energy and the songs are made to sound lame. I think they did this on porpoise.

I must retaliate.
"Why?"
Because they made it that way.