Swans - Soundtracks for the Blind

THIS IS THE FINAL SWANS STUDIO ALBUM

This is what we're talking about: 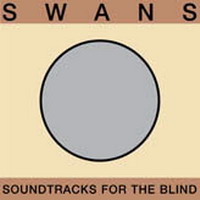 Soundtracks for the Blind, released in 1996, was Swans' swan song. There are two CDs, Silver and Copper, and something like 130-minutes of music.

If you were to listen to Soundtracks for the Blind directly after having heard any of the material from the Cop/Young God/Greed/Holy Money CDs you'd be forgiven for thinking that there were two different bands responsible for the music. For example, with regards to those songs and these: instead of finding Michael Gira bellowing over loud, crashing music, you'll hear him singing over quiet orchestral pieces or acoustic guitars.
Of course, we have to keep in mind that 14-odd years have passed since those albums and this one, and it has become clear that, during this time, Swans had slowly developed into a more proficient, subtle, powerful band.

The music is now mostly comprised of instrumental soundscapes in which understated strings, ambient keyboards, found sounds, samples, loops, bits of dialogue - basically a sound-collagists wet dream - buzz and sing for minutes at a time, the only variation being odd spectral sounds that percolate to the surface only to drown again. The closest (though admittedly wholly inadequate) parallel I can think of is to compare this mess to television static.

To these soundscapes samples of soliloquies and/or conversations are sometimes added that are so random, so completely peculiar, that it is impossible to imagine a framework in which they could plausibly exist. Moreover, these conversations neither follow on from each other nor seem to be thematically related, so any attempt to construct a coherent narrative is ultimately met with failure.

On top of the instrumentals there are also the songs, which, for the most part, are solemn dirges that build in intensity, churn noisily and then, convulsing, subside. Swans have made dirges into an art form. Even the 15-minute plus, "Helpless Child," doesn't drag, and is in fact probably the best song on the CD.

Not everything on, however, here is a dirge, and the diversity of songs on Soundtracks for the Blind, analogous as it is to the collage-like nature of the instrumentals, makes for a pretty interesting, unexpected listen. On the first CD alone, Jarboe delivers both a blistering live track and a thumping electronica-type song.

Soundtracks for the Blind is a fine testament and a fine farewell to one of the most powerful, cathartic bands that has ever existed and it is essential listening.