Pink: The Truth About Love tour

A man in ruby red takes a few minutes to lick the bald scalp of a man who looks on with a straight enough face. His chewing gum offsets the discomfort expressed in his throbbing temple veins. Smack smacking the jaws, the gum chewing more and more exaggerated. He's trying to keep still, cool, but his eyes want to bug out. And then the spotlight moves off the forehead now in a waterfall of sweat.

Up one side of the stadium and down the other the man in the ruby coattails is blazing a spotlight through the crowd as they finally get to their seats, ready to stand in front of them. Pink is up after The Hives.

As concerts never start on time so too nothing is different here. The Hives come and blast through the ear drums to set the ringing tone before the main event. The Hives are an appetiser, and so in keeping with the level and atmosphere set to parade they complement the meal nicely. Howlin' Pelle Almqvist takes grand liberty with the open nature of the cups, overflowing they are with the easy to reach beer. They are not a humble band and they are not a quiet band. Bravado struts less than they do. 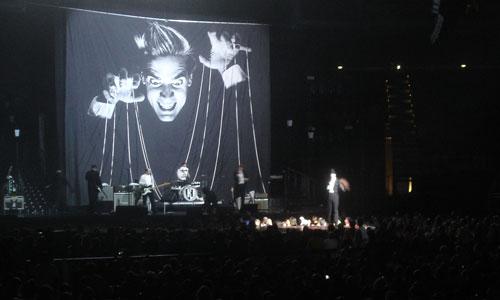 The Hives open in tuxedo tails and top hats

"Hate to Say I Told You So" and "Tick Tick Boom" bookend the tight high intensity set and you will agree with their many self-congratulatory taunts for it sounds even humble now. They are loud, they are bombastic, they are how you start the night right.

Intermission. The lull. Throat starts feeling dehydrated and rendering flaky lips for days to come. Lights back on for a few and then they dim when the Covergirl commercial starts. Then the concert intro kicks in with P!nk giving the finger when interrogated on the truth about love.

Pink spends a lot of time airborne. Be it in a cage with four men rippling with muscles, dripping gold in aerial silk, or thrown around by the neck for "Try", her feet barely touch the ground. The slower songs feature more of the intricate acrobatics, evening out against the romp on numbers such as, "Raise Your Glass". At certain songs if you look off to the side you can appreciate how the strobe lights could trigger an epileptic fit. 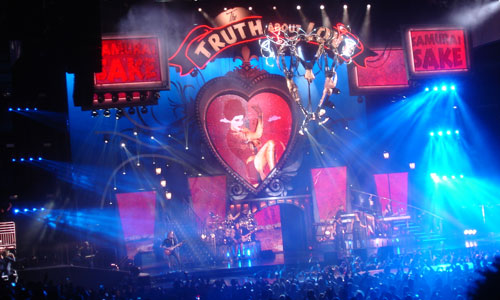 P!nk takes to the skies in one of many songs

There are no fake encores as many concerts and gigs lead you to applaud in the dim not-dark for. Interludes, yes. We have those in the form of a guitar solo that runs on and a pair of dancers that grace the stage. The first interlude happens upon a twinkling face, the video playing drifting sleepy sounds lulling before P!nk is back out again after a wardrobe change. One of what looks like a dozen swap-throughs. You can hear her singing, but you can't hear her hitting the wall. She's a machine and the workouts have definitely paid off.

Nate Ruess of Fun. in his video sync duet on the emotional "Just Give Me A Reason" shows off quite the impressive skill in singing all around his flailing tongue. How it's not cut chomped with the spin is a marvel. Toward the end throwing it all the way back to the start Pink does a quick medley of songs including "There You Go" off Can't Take Me Home. In, out and done. 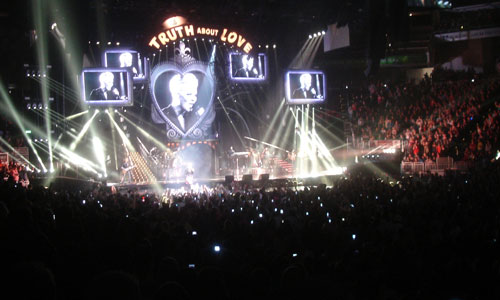 Audience basking in their own smartphone and camera screen glows

If we're counting the times it takes Pink more than a minute to run off to change it presents the show in a neat three act waterfall. The ups lift you up and then you swing it down for something lovely. It's gradual, paced and a deliberate celebration.

Narrow platforms move about in one of the final songs but doesn't take to use until "So What" revs up and sees Pink hurl herself in an outfit of glittering gold. Covering the circumference of the lower bowl there are points in the swinging that she's about to kick you in the face. It's that close enough feeling. That would have been something else. You can either watch and feel the breeze as she zooms past, diving into the crowd at a near dead drop from the rafters or light it up with the rest of the arena with their cameras and smartphones. Why it doesn't dawn on you to both watch with your eyes live in the moment and film with the screen angled in the general direction, that's something to rue later on as the traffic worms through the car park at a drunkard's pace along midnight.

Throughout the night someone behind keeps jabbing their weak fist into the shoulder as they shout out, "Are you not excited? Are you not excited?" But that is why we are here. And we are entertained. It is a grand spectacle. A glorious production of cohesive energy, fun and a wonderful tapestry built from the lyrics and songs in Pink's catalogue to date.

Watching on from section 114, row K during the 8 March 2013 leg at the corporately named KFC Yum! Center in Louisville, Kentucky on the Ohio River.