With The New Violence Peabody have turned in a darker, angrier record than I think a lot of people expected, and, in doing so, have released what is so far easily the best CD of 2005.

The truth is that Peabody was going to have to do something to make us want to listen to this record; after all a direct reproduction of the Peabody live sound onto a compact disc would be exciting but, also, ultimately disappointing.

Peabody successfully distinguish between the two arenas of sound (live and studio) by virtue of little added touches and flourishes and details that not only flesh out the live songs but somehow also make them less impersonal.

Of these "touches and flourishes and details" the keyboards and French counting on "The Weight Just Right" come instantly to mind, as does the discordant screaming and the answering message found on "I Find the Words" and "Got Your Hooks in," respectively.
(Incidentally, I have been reliably informed that the answering message sample found on the latter is what actually makes the song.)

"Got You on My Radar," that delightful little trawl through Ben's record collection, gets better and better with each successive listen.
Whilst it at first sounds slightly out of place amidst the darker material — "Got You on My Radar" could easily have found its home on Professional Againster — it not only holds its own, it also manages to wrest some attention away from the other songs.
The song accomplishes this in two different ways: it, a) boasts some pretty raucous guitars that rob it of its pop-sheen; and it, b) acts as an interesting counterpoint to the rest of the album.

Accordingly, "Got You on My Radar" isn't the only song to provide us with this interesting counterpoint: the clean guitars and keyboards of "I Don't Know" provide the album's quietest and also most poignant moment.
World-weary lyrics and melancholic vocals betray a general dissatisfaction and present a directionless plea for help. "Who'd have thought that being could be such a trial?" indeed.

The biggest shock of the album, however, is easily "Song for Val," a groovy, trippy number that derives its strength not from fury + fire but from reverby guitars, distorted bass and drums, and an almost menacing duet between Bluto and Sarah Blasko.
"Song for Val" is quite unlike anything that Peabody have ever released, challenging Bluto's statement of a few years ago that they, and I'm paraphrasing, "made dumb rock music."

"Wrecking Ball," the second (radio only this time) single off The New Violence positively roars into existence — its sudden appearance even more jarring after the odd fade out of "I Find the Words."
A quiet middle section with high and low backing vocals coupled with some ferociously political lyrics and an appropriately fierce vocal performance by Bluto make for what may very well be the album's best song.

Then there's "Au Expose," which unless I'm shown a lyric sheet that proves different, I'll simply assume it to be what it sounds like it is — a cutting invective against religion and its practitioners thereof. I don't mind, mind you, I'm just saying.
(Incidentally, I had automatically assumed that "Au Expose" would close out the album simply because it was used so often to close out many a Peabody gig. I was wrong.)

Everything on The New Violence is a revelation:
"The New Violence," with guitars that don't as much ring as they do clang is another highlight of the album and probably my favourite song.
The minute and a half, visceral "Don't Lose it" that provides the only "Bluto scream" of the album before bringing us to the album's real closer "Got Your Hooks in."
on and on and on... 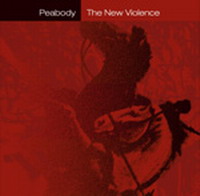 Also, kudos to Jamie Hutchings for the excellent production on The New Violence.
Everything here sounds noisier and messier and harsher than it possibly should and it is all to the benefit of the record.