Brittle stuff the plastic, the wrapping that keeps a copy of Human Rights Defender through the post. Breaks apart at the mere touch, yanking it from the ranks to read through and through. It is, alack, from the era of 2007 and back, so time eats away enough to render the plastic a broken dream of dreams. And gloss breaks into the light.

Human Rights Defender is the free quarterly of Amnesty International Australia. If you sign yourself up to donate, even once, you're on their books and finding a little reading material every four months hitting up your mailbox to sit you down with an iced vovo and cup of green tea. Your tastes may vary though. Rondoletti? 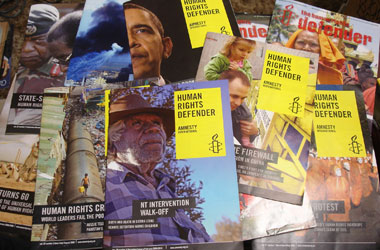 for the eagle eyes, pick out the dates of the covers

The magazine remains as its own and against chuggers. As a conversation starter, it's a still-birth drop on the floor. The party up and leaves the room, unless you're on a train. Captive audience is a captive audience. Matters much on the ears you want to bring the issues up with.

Matters too on the type of mood, or set you're sitting down to read. There are info dumps here and there, but thankfully in asides and pull boxes. It's sharp, smart and no nonsense. Hitting right into the details and reports, it's often dry but very much enlightening.

Articles do as you would think they do. They highlight the plights, sufferings and situations of people across the globe taking the beat down on liberties, freedom of speech and general wrecking of the Universal Declaration of Human Rights. No country or nation state gets a free pass. A wrong is a wrong and the tone never pleads of desperation within the paragraphs. 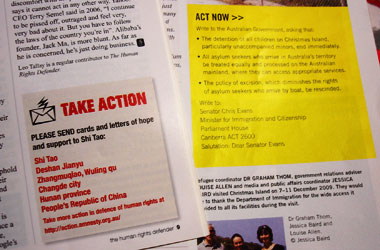 Which of these makes you want to write a letter more?

Ending out articles in clear, now here's what you can do to help launches, are calls to action to, well, read middle of current sentence. As it is now, the state is bold and simple, throw it back a couple of years and the look shows itself a less serious tone and urgency.

Speaking of, the publication showcases the wins and losses and stalemates of various actions and campaigns. Really, the guts of what the articles are presenting you with.

Subscription to the magazine and donating to Amnesty are non-mutual locks. You can have one or the other. Or neither. Every copy asks for itself to pass along the chain when you're done, to help other people to know more about the work done by Amnesty International. Okay. It's probably better this way since people are antsy when you sit them down and try and get all geo-political, human-rightsy on them.

Unless your parties are rights riots.

For its flimsy paper weight, Human Rights Defender is a deceptive read. Taking as much time as others, even more so, the word count and information density is extremely high. Readability is smooth flowing.