Don't Let Our Youth Go To Waste 1987-1991 is a comprehensive double DVD set that aims to bring together all of Galaxie 500's recorded footage.

The first disc collects the four music videos - all directed by Sergio Huidor. These are all pretty similar in that they juxtapose the rather quiet, reflective music of Galaxie 500 against some very violent images. The video clips are actually very clever and certainly very arty.
The live archive is of five different shows taped between 1988 and 1990. Some of this stuff is pretty primitive with the sound in some instances being taken from the video camera microphone. However, the shows, despite the often shitty quality, are all worth watching, and it's nice to trace the development of the Galaxie 500 live show.
Finally, there is a taping of a set played on UK television, which is followed by a short interview with the band. This is particularly interesting because it features the band playing in a different set-up with the drummer now fulfilling rhythm guitar duties.

The second disc collects two bootleg concerts, one in Atlanta, Georgia, the other in London.
The Atlanta gig is fun because the band is, at their own admission, a leetle bit drunk, and the show is as loose and unrestrained as Galaxie 500 were capable of being.
The London show, on the other hand, is of a more reserved Galaxie 500.
The sound and footage of these two gigs is as good as you would expect from a bootleg recording. In other words, it isn't very good at all. However, it's definitely watchable and definitely worth owning.

The DVD set is accompanied by a pretty generous booklet that contains exclusive photos of the band and, more interestingly, and a transcript of an interview conducted by Yo La Tengo's James McNew.
The interview is of particular note and value because it is structured around the various performances. In short, you not only get the bootlegs and the live shows you also get the band's reflections and memories of those particular shows. 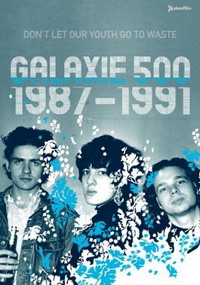 It should also be noted that whilst quite a lot of music is presented in these two DVDs there is very little in the way of overlap. There are, I think, a handful of songs that show up twice and maybe one or two that show up three times but, for the most part, most songs are only performed once.

no hope?
see, that's what gets you shot.