Spluttering up a mean dose of determination, the lungs give out as the back of the throat cakes over with a dusty and dry void. And the asthma strikes again. And there, in the wilds of Bolivia, Ernesto "Che" Guevara hacks up the resolve, fortitude and the sheer essence of convictions to lead himself down the path of a sequel that proves that there are few exceptions to the rule. The Bolivian uprising, not so wheezy hot.

Far from it to speak fault with the film itself, second of a two-part biopic on the one-time doctor and now for all time professional guerrilla. Of the events unfolding across the flicker of the screen, down in the books and annals of history, there is something about taking an idea and stretching it beyond its skin. A breaking point that snaps back with a certain harshness and unforgiving strike.

No, what utters the whispers of failure is that of the idea of bringing about a revolution and movement to a peoples that neither cares nor wants to follow the lead of a revolutionary leader, no matter how strong and impressive their rookie campaign. One which happens to be heartily explosive and amaizeing in execution. 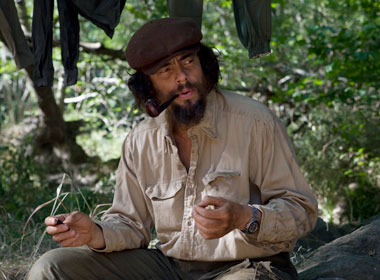 In this Latin America, Bolivia proves to be the end game for Che Guevara. The final battle ground and ultimately the bookend to his amazing transformation from a curious Argentinean doctor to the legend that is later screen-printed across all manner of merchandise foisting a hipster style of fashion without understanding or knowledge.

Taking the rule of sequels rarely besting the original, so it is with the deterioration of both his health and those that walk by his side that sees Guevara's follow-up campaign down amongst the exposed roots and hidden with a cover of desperation, of not being able to see the clouds overhead withering any and all ties, fading them all away into the non-responsive and unhelpful atmosphere of a shotgun firing into the dead of night and waking up with a hangover the size of defeat.

Gruelling, tension is constant and the lack of nearby water, coupled with circulating fresh air parrots a sickening blindness as the lights momentarily blackout while the teeth are fitted in. Scrambling past the one man in the audience who sports a Che emblazoned T-shirt (and who knows what, if any, the level of irony in that parade) the setting is without the pomp and ceremony of the mastermind and his success and orchestration of the overthrow of Batista's Cuban reign.

None of that, now under the cover of disguise and darkness and a handshake of pseudonyms. With the backdrop of penning The Bolivian Diary, Guerilla is a long and enduring vision. Time is gone on hours and the attention holds a strict clasp of the nape, the calm with the execution of taking a step the right away and never once letting go.

Palms sweat with each encroaching day along the trail of freeing the people from their government and spreading the butter of communism across the Latin American maize. It's export/import where the import in this case happens to form a dissonance with the Bolivian locals. With the peasants unwilling and the countryside proving to be a far more hostile environment, the aimlessness and hopelessness of it all slips mercilessly out of Guevara's hands. 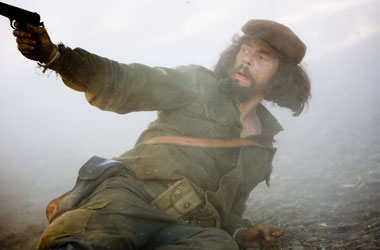 Taking back all your 26 Julys

Shot entirely in Spanish and directed by Steven Soderbergh, Benicio del Toro exudes an most unmistakable gravitas and charisma in the eponymous role as the film exacts a most depressing vision of history that sees it all go from bang to whimper. It's impossible to see how del Toro just isn't living as Guevara, so within that body and role he wheezes.

Resolute all the way to the end, it's losing the faculties of breathing that leaves watching it all unfold a beautiful investment in the size of Guevara's heart as it bleeds a resounding emotion.

Che: Part Two: Guerrilla is based on The Bolivian Diary. You can buy it from Amazon if you're so inclined on reading the source material.