Che, Part One: The Argentine

Che: Part One is sandwiched between Ernesto “Che” Guevara’s first meeting with Fidel Castro in Mexico, in which Guevara joins the 26th of July Movement that eventually overthrows Batista’s government, and Guevara extracting a promise that he would be allowed to export the revolution to the rest of Latin America. This not only sets up the second part of this four-hour tour-de-force, it also gives an insight into the sort of person that Guevara was. After all, the notion of exporting a revolution to an entire continent, before having actually successfully achieved one of any kind is audacious to say the least.

The movie is constructed around two connected narratives: the revolution in Cuba from when the 26th of July Movement land on the island to just before they enter Havana, and Guevara’s 1964 visit to New York City to represent Cuba at the United Nations. The visit to New York City – filmed in black-and-white, in contrast to the colour of the action in Cuba – is an intellectual anchor of sorts, a kind of philosophical and political epilogue to the revolution, in which we get to see, if not the fruits of Cuba’s revolution, at least a glimpse into why that particular struggle was deemed so necessary.

Che: Part One’s subtitle, The Argentine, acts as a reference to Guevara’s initial outsider status and his struggle to gain acceptance as the only Argentine amongst the Cubans. It is also a reminder that Guevara went into this thing rather inexperienced, but through his resourcefulness, his usefulness as a doctor and his aptitude for guerrilla warfare he became an instrumental figure in the struggle, ultimately taking Santa Clara without the help of Camilo Cienfuegos – who, incidentally, looks remarkably like a young Mungo MacCallum. In short, the two parts show a progression: the Argentine that becomes a guerrilla. It is no coincidence then that when Guevara first lands in Cuba and suffers his first asthma attack you are left thinking that this man is wholly unsuited to the task at hand. However, by the second part, which is, admittedly, outside my brief, when Guevara suffers another, this time particularly bad, attack and one of his own making having forgotten his medication it’s hard to suppress your admiration for the man’s tenacity.

The screenplay, written by Peter Buchman, is based on Guevara’s memoir, “Reminiscences of the Cuban Revolutionary War." One would expect – I don’t know, having not read it – that such a book would carry an inherent bias, a tendency on Guevara’s part towards sanitising his more questionable actions during the revolution. However, to his credit, or Buchman’s, Guevara doesn’t shy away from admitting to the UN in 1964, for example, that executions had indeed taken place under his command.

The acting, from a cast largely unknown to me, is without fault. Benicio del Toro is the obvious box office draw-card, and also the obvious choice, for his resemblance to Guevara is quite startling. His performance is so commanding, so authoritative, that, to my mind, whether accurate or not, it is how I will now always imagine Guevara to be. Catalina Sandino Moreno, Guevara’s guide and soon-to-be second wife, is another name that might sound familiar, having come close to an Oscar for her portrayal or Maria in 2004’s Maria, Full of Grace. The rest of the cast are perfect in their respective roles.

Part one is the better of the two films. However, where it trades on heroism in victory, part two trades on heroism in defeat. Both of these models are so utterly romantic that these two films will only deepen Guevara’s status as a symbol of the struggle for social change, whether you agree with the methods or not.
An excellent film. 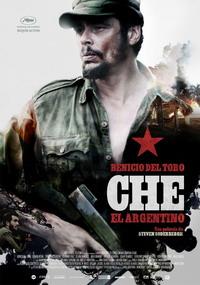 Che: Part One: The Argentine is based on Guevara's Reminiscences of the Cuban Revolutionary War and you can buy it at Amazon.