The Hubbard is Bare

I am still alive. Alive, breathing and without a hint of thought about trying to off myself. That revelation is a marvel in itself. Unbeknownst to me I had deadly tendencies that lay dormant and were ready to take hold any day. That was back in 1999.

It all started with a trip in the city. For the life of me, I don't even know why I go there. There really isn't much for me to take hold of. In fact, every time I do find myself amidst the polluted walls of the buildings and streetscapes of the city I get this immense feeling of utter tiredness. I'm sure it has something to do with the vast amounts of walking you have to do in order to get around. It couldn't have been just to check out what comics were on sale that week. It never is. I know of a place that is far closer than the shops hidden away in the concrete wilderness. But it was while I had just been checking out the comics on sale that lead to the discovery of what I didn't even know I was.

The banner of "Free" is always an appealing attractant to any situation that I happen across. In this case it was annexed with the words "Psychology Test." The first word already had my legs walking up the steps of the Church of Scientology. The atmosphere inside the first floor of the supposed church was that of confusion. For a Church that boasts the membership of such high calibre stars as Tom Cruise and John Travolta it seemed more like a bookstore on the verge of collapse.

After being escorted past the huge brass bust of L. Ron Hubbard I noticed empty tables on either side of the room flanking a display of shrink-wrapped Dianetics books. Time was passing and I was eager to try out the free psych test.

The questions were a blur by the time I finished the first of what might have been twenty pages of repetitive questions. I don't think I can even remember properly reading any single poser. Two hundred questions or so later and I was waiting for them to process the results of what I thought was a damn simple quiz. The looks on the faces of the people reading the readout weren't at all very encouraging. They were dumbfounded. I was bored.

The guy who set me up with the test came back with a sheet and asked me to follow him into a cubicle between the display and tables. The tone of his voice was unsettling. The look of his eyes were glazed. He spent the next ten minutes showing me the graph and the points along it to which I had scored. 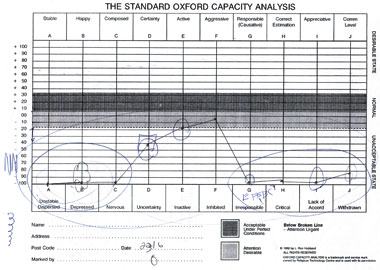 Apparently with all the marks below the thick band of normalcy I was very likely to walk out that door and commit suicide. This was an absolute floorer. But I withheld my laughter and remained resolute and decided to see what he would say next. After all, once you've been told that you're suicidal, nothing should phase you.

What came next was nothing short of a hard sell on the Church of Scientology and Dianetics. They have perfected the calling, instead of beating the footpaths trying to get people to listen to them they get the people to walk right into their doors. Genius. I was snapped out of the state of daydreaming when he mentioned the word audit. How did taxation relate to suicide for me? Basically what an audit is is it you are seated in a room with another person and you just talk and talk and talk. The other person is just there to listen and doesn't talk back or about your thoughts or feelings. 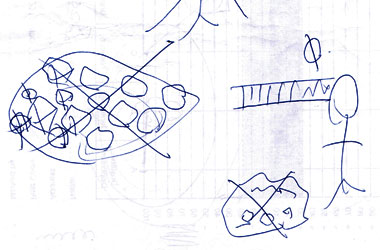 There was this weak diagram on the back of the test that the guy sketched to explain something about transference of "badness" or something about a theta-being from one soul to another. For the $120 that the audit would cost it seemed like a rip-off if I was the only one talking. I could get have gotten myself a bottle of well-aged scotch and terrorized the local shopping strip for a fraction of that cost. I told the guy that I didn't have more than ten dollars in cash and he quite quickly pointed out that the Church of Scientology accepted credit cards. I managed to walk out the door with some pamphlets, brochures and a reminder to seek help immediately.

That was back in 1999 and I'm still alive and haven't ever had a thought about suicide. If all the science-fiction philosophy and genius in the world can't make an accurate test, then is there a reason to take them so seriously?

And you thought filling in Jedi on a census form as your religion was stupid.

Following to the publication of this article, spokesperson Virginia Stewart extends an invitation to revisit the church on Castlereagh. The result eventually becomes Return to Castlereagh.