Cast from the days of July to September 2006, an interview and article on Sydney punk and alternative band, Throwing Knives. Petar Konakov (vocals and guitar) fronts up to the transcription mic to share insights into the band and his move from an earlier project.

For Konakov, jumping from Sounds of Coma to Throwing Knives is quicker than thinking up the first question to ask him. And therein cries the death bong, so silent as it is when you wrap cotton around it.

"There was probably about two minutes between bands! After Randy [Serrano] told me that we would have to take another six months off, I made my mind up straight away to join Throwing Knives.

"I called Paul [Gellin] the minute I put the phone down. I was going to do Throwing Knives kind of as a side band, but with Sounds of Coma doing absolutely nothing, I wanted to throw myself into it completely."

So it starts with a nugget of honest truth. See a dying body, latch yourself onto the next warm thing with legs. Only in this case, there's a hacksaw ready for the moment you sit and wait for the inspiration to whip up follow-on questions.

Questions, to ask a band member of, well, that's the thing. There is no take, no background, no thing to spur the inquisitive mind. And the thing stalls everything around you.

After the first volley, the weeks creep and lay waste to the effect of mooning the years to follow. Each bare knuckle denting the sodding greens that would see a concrete overlay. Letting the rain wash it away is easier than firing up the lawn mower to clip the blades of browning grass. 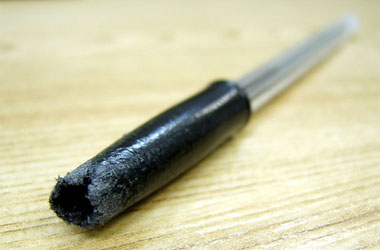 Ugly is the toil of frustration

Bright sunny days and dark stormy nights give way to mozzie loving humidity and a constant barrage of distractions. To procrastination. To facing a wall of cobwebs and wondering just how it's possible to fit 27 people into a new VW Beetle in ten minutes but forever to finagle another unworn jacket from a decade ago into the closet of where moths fear to flutter.

One weekend is the same as the next. Indoors to see the end. Forgetting the one budding seed, a want or knowing how to kick it off. Wanting is the same as thinking and planning. Nothing happens.

"I was over all the false starts. Start a new album. Stop. Get on a roll with shows. Stop. I think that with that constantly being the case, we had to eventually stop [Sounds of Coma] and look for something new."

Appreciation of fans, the intricacies of distribution and ear infections, exposure under lights, getting the word out...

Getting into the head and coming back out is one thing. Finding a reason to pull out the scalpel and taking to task the scraps of an ill done interview takes a worth unseeing. It's called interest and it's most definitely siccing its teeth on the next thing.

It's all about how you do it right, right? Sit down, ponder and push one out the far end. Ruminate on what it means to be a music artist in these days of digital spit-swapping. Examine the abstraction of their micro and macro world views and avail to the reading public an insight they otherwise would not find themselves.

First step: attend one of their gigs and get the music journalism credentials closer in the sweat of the moshpit.

"It was the most unbelievable first gig we could have asked for. I'm not sure how many more people could have actually fit into the venue. Everybody was really receptive of the music and the crowd was making a lot of noise between and after songs in a good way. Couldn't have prayed for it to have gone better than it did. Can't wait for the next show."

However, that type of inside breathing involves stepping outside the safety zone of the compound and breaking away from the standard music fare.

Never hurts to know your subject in their environment. That's called researching your topic. One of the many tenants of good non-fiction (and fiction (not necessarily fantasy)) writing.

This is not about good writing. It's nowhere even near solid.

Makes no sense to lose track and keep on running blind into the darkness. Takes work. Takes interest. Takes a whole lot of a thing called dedication to craft.

"A lot of what I write is very spur of the moment. If I set myself a goal to write a song it usually turns out as a piece of crap. But if I'm just strumming along that's usually when the stuff I'm most proud of comes out. Sometimes it's music first, sometimes it's a melody, sometimes it's lyrics. It can't be forced, it has to flow."

The angle of craft is waiting in limbo. Waiting for a sharp edge of tact. Of brilliance over middling obscurity. And then a month. And another. Next thing you know, it's the end of the first decade of the 21st century and the interview lies in pieces.

Same as it was three years ago, but at least it's under a new folder and filename. For ongoing projects. Of which it's the only one still in the raw state of "get around to it some other day".

Looking over the notes, doubling up the quotes and squeezing the then to the later now. Undesires are rife.

"It's definitely comatose at the moment! I honestly can't see the three of us in a rehearsal room together any time in the near future. but the way it ended definitely leaves the door open. I'd like to think there is life left in that band."

Sounds of Coma? Yes. Contextually so. Throwing Knives? Might as well be. Out of context and limping off.

They no longer exist in the frame of mind that wants to pursue a trickle of an introductory ramble (the kind where the interviewer meets up with their subject and the food is just delish or the mood is a jungle safari), let alone a fitting conclusion.

When their FasterLouder band page is void of content, or even when they no longer run their own website (over now to domain parkers), call for time of death at the height of pursuant disinterest. 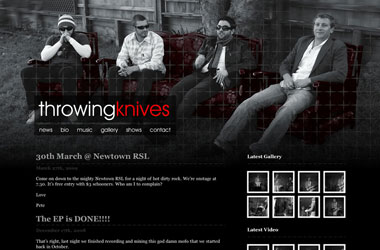 Their apparent expiration becomes the inspiration.

So why not track down the members to verify the status of Throwing Knives as a unit of rock/punk/alternative Sydney sound? What beastly atrocity is this not?

Too long into the ether of thought and you miss out on the reality of passing away an evolution of acid solutions and dissolutions.

Interviews are in a moment. Capturing an essence of history from the perspective of an individual eye outside the daily news cycle of bushfires and tourists wasting state resources as they trek themselves lost in a national park.

Spend enough time going over the notes and the riffs die out. No treble, nor bass. No songs to scream along to.

Pull the plug and yank out the feeding tube. This patient is dead. Hose out the gurney, it's time for something new. Get on with your lives. Put away the pen, the paper and the Throwing Knives.