Quiet is the quiet rule that exists in the realm of the public toilet. An extension to the masses of the wonders of indoor plumbing and experiments in tile decor selection. Sanctuary from the blathering blabber as the bladder and colon reign supreme over the porcelain throne. The sacred act of bowel expulsion and draining of the fluids entertains to some unfortunate few a novel arena for talk and discussion.

This is not permissible. In fact it is against the laws of expediency and concentration to conduct any kind of external business inside the echo chamber of grunt and relief. Culprits prime are that of familiarity; colleagues and friends who happen upon at the same time and strangers sharing the moment. Whatever that moment happens to be.

Two or more people letting loose in the room of tiles hardly ever work in tandem outside the nurses and carers of the world. Keeping up flow of traffic and the stake in killing conversations is all in the timing and execution. 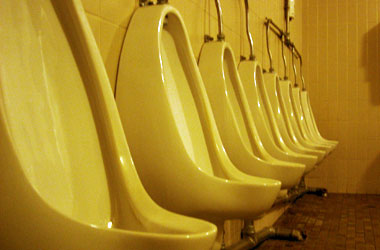 Side note: If the phone rings in the middle or the end of a transaction in evacuation, let it go. Nothing is ever so important as to the need to conduct simultaneous conversations through both ends or to distract from stemming the cycle of germ transfer.

Public toilets, and more so that of toilets in the office or warehouse building, can too be conversation free zones.

Respect the peace and remember to wash your hands.