For a Sydneysider The Golden Mile was always going to be the most appealing series of Underbelly. It covers 1988 through 1999, which, for a thirty year old, roughly corresponds to the time he might start paying attention to the news. The shooting of Lakemba Police Station or that year of kneecappings and other associated violence lingered the same way a hot summer does, leaving one reeling and with a template imprinted onto their brain against which all future summers are compared.

In a way it’s smart to tell the story of Kings Cross through John Ibrahim - he was there in the beginning of ’88 and is one of the few still there now. Unfortunately, the fact that Ibrahim is still there presents a certain obstacle; you can’t say the same sorts of things about Ibrahim that you might be tempted to say of Freeman, McPherson or even the Bayehs, as you risk committing libel. We mustn’t forget, after all - and this the show also makes clear - that the only conviction recorded against Ibrahim is for an assault committed when he was a teenager. He isn’t called Teflon John for nothing.

What we get, then, tends to the slightly implausible: the police are determined to get Ibrahim behind bars; the crooks are determined to knock him off his perch; a nervous Danny Karam telephones him to avoid a reprisal over an attack on the Tunnel nightclub; Harry ‘Hammer’ Hammoud refers to him as “the smartest operator in the cross” - but the fact is that we never actually see Ibrahim do anything to deserve the reputation. In fact, by the time Hammoud makes his claim about Ibrahim the only notable things that can be said about him is that he’s been stabbed, shot, owns a few nightclubs, legally, and has made it abundantly clear several times that he isn’t in the drugs game. By the end, you can't help wishing the police would just leave him alone, especially as Firass Dirani's Ibrahim is so charismatic.

However, what The Golden Mile lacks in story or, perhaps, revelation, it more than makes up for in performances. Diarmid Heidenreich is perfectly reptilian as Eddie “Parrot” Gould, Emma Booth and Firass Dirani are both excellent as Kim Hollingsworth and John Ibrahim, and Steve Bastoni cements his reputation as one of Australia’s best character actors - the latter immerses himself so fully into the role of Louie Bayeh that it’s hard to believe he was once Michael Drury in that other landmark of Australian crime television. However, the best actor prize goes to Dan Mor for his unhinged, slavering, wild portrayal of Danny Karam. 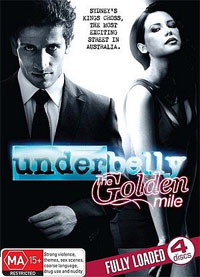 If the television adaptation of the Underbelly story is somewhat patchy, then the print version, in which the authors had the time and opportunity to put together a comprehensive account, is just sloppy.

The story of Juanita Nielsen, for example, the publisher of the NOW newspaper and whose activity against development projects in Kings Cross is thought to have led to her death, is mentioned only briefly in, perhaps, the Abe Saffron chapter or as an afterthought in the story of one or another crooked cop.
If this is a grievous omission, then what can we say about the inclusion of David McMillan’s story? The story, in itself, is excellent, full of drug smuggling, jailbreaks, conniving and con-artistry, all that exciting stuff we look for in true crime books; unfortunately, the parts of it that do occur in Australia are confined to Melbourne, the other Australian crime capital.

Equally superfluous is the inclusion of the Fine Cotton affair – a failed attempt to run a ring-in horse in a Brisbane race. In fact, the only connection to The Golden Mile is found in the second paragraph of the chapter where we learn that some of the planning took place in “the pubs, clubs and coffee joints in the Kings Cross strip,” and where there is the suggestion that Sydney gangsters were in on the scam.
The book, it can be said, really ends on the thirteenth chapter, that covering Abe Saffron. The rest of it, especially the particularly tragic case of Revelle Balmain, all deserves to be reported, just not in this book.

Underbelly: The Golden Mile is also badly written and badly edited. Just as an example of the dramatic over-writing that plagues this book, I offer from the first chapter, “Not that coppers would pay for anything, of course. Their motto was ‘Crime doesn’t pay – and neither do we’”; then, two paragraphs later still talking about the police: “No expense was spared – because they weren’t paying.”

This unfortunately isn’t the worst of it. In the chapter dedicated to Louie Bayeh, we learn that in 2000, he was shot at by a group of unsavouries and hospitalised. The authors then inform us that Bayeh “recovered well enough to go back to his old ways,” before detailing a series of crimes he committed between 1988 and 1992, and again in 1997.

Between the book and the television series we get a dappled look at what happened between ’88 and ’99, and we are a little closer to understanding just why those years were so particularly violent. It’s a shame, however, that the story wasn’t told a little better. 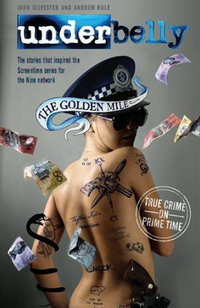 Buy the complete Underbelly: The Golden Mile series from Amazon.