You won’t find Ishmael Butler’s name anywhere on Black Up, much less any reference to his previous incarnation as Butterfly in the Digable Planets. In a way it’s a shame he dropped the Butterfly appellation as his career has seen a series of transformations: from the jazz of Digable Planets to the dark, stoned funk of Cherrywine to Shabazz Palaces.

Butler is all of forty, a hip hop elder, but it’s almost inconceivable just how youthful Black Up sounds. The vibrancy that throbbed in Digable Planets, their “Good try-ers/is good die-ers...” is alive and well. “Up or don’t toss it all,” is the refrain from one song, "If you talk about it, it's a show/ but if you move about it, then it's a go,” he raps in another.
It’s a youthful energy that transcends couplets and choruses, though. “A Treatease Dedicated to the Avian Airess from North East Nubis (1000 Questions, 1 Answer),” one of the many elaborately titled songs on the record, easily captures the intoxicating swirl of falling in love. Similarly, Butler drops a stinging battle rap which would give younger cats pause on “Yeah You,” the song itself rattling like heavy machinery.

Giving Shabazz Palaces context is one thing, but describing the music is a little more difficult. Its antecedent is the fractured hip hop of Anticon or Black Mamba Serums-era Bigg Jus, but its cousin is the stuff being put out by Odd Future – though it’s decidedly less mean-spirited than the latter. This isn’t commercial hip hop. The beats clap hard then veer wildly into jazz or funk or fractured electro-soundscapes.
Black Up is one of those rare hip hop records that excites because it sounds quite unlike anything that’s out at the moment. It’s true that it’ll get caught up in the Odd Future rush and maybe even get pushed along in its wake, but one gets the impression that when Butler drops a record he doesn’t suit the times, the times - much as with John Howard - suit him. 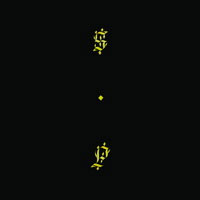