Making off with half a chocolate bar, wherein the other half turns out to be no picnic at all, the path across busy roads lead the walk to a lost huddle and hassle of a cleaner in the lobby of the State Theatre's adjunct. Wrong way, down and around a retro spin. Take an out and head down underground below the city streets. And here is the tale writ in film of Samson and Delilah directed by Warwick Thornton.

Sniffing paint never was so much fun with the laid back air of a head filling up with spots and fumes. Constant huff and snuff the stuff to fill in a day in the life of Samson (Rowan McNamara). A young Aboriginal man waffling away his existence in the outskirts of who knows where and the din of outback radio against the one song his older brother plays over and again. On another part of this shanty town is Delilah (Marissa Gibson) who takes doting care of her grandmother. They too living each day as it comes, but dealing with the waking hours in a different track, painting it all beneath them.

After the fade from black, the stillness of life in this quiet hazy craze of the daily grind is upon the eyeballs. Senses pick up fast the droll and it's already onto the relationship unsuspecting but blossoming between Samson and Delilah. Red dust of the Australian outback deftly serving as the canvas in which the two play the break to each other's foil. 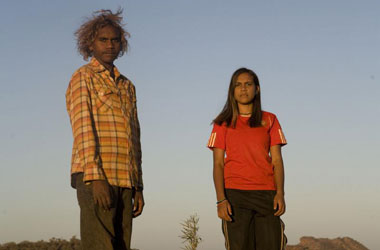 Brutal is the communication between the characters; a harsh dialogue of pain, suffering and exile. Bloody eyes go no more raw than Samson's as his method of escape spins out of control and highlights his wanting wandering aspect of looking for a place to hunker down and live. Delilah's face shows all the struggle for the couple. Her hidden voice whispering with powerful hurt and unrelenting inner strength as they find themselves on the way out and back again.

Romance bubbles well to a boil of unspoken emotions as they tip toe and the two young actors create a relationship so truthful and honest they can't do anything else but be remarkable.

Isolation and being are the major thematic bones of this sense-reckoning exploration of survival in the lives of this young couple. Chaotic is the unexciting prospect of looking for a home as it wrings a therapeutic course over the glimpse into their engagement.

Loss and blindness happens to slides its dusty way in as they shuffle along the scape of life with an enjoyable and warm array of characters. Small though the cast may be, they more than make up for it in terms of presence. Scott Thornton as the homeless Gonzo under the bridge is one of the more visceral and entertaining characters. His breaks into bad sing-song providing moments of parallel levity in otherwise dour punches. 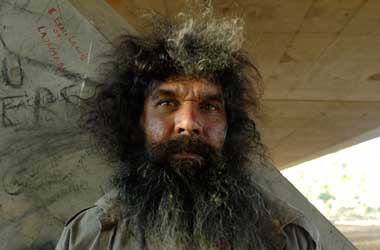 Gonzo, outside/inside his home under the bridge
Photo by Dimity Slater

Subtly the caring pace of the film creates an entire punctuation of its own rhythm and indeed another layer of dialogue.

Thornton creates an experience of sitting in the now that feels far longer than the clocks suggest upon the roll of the credits. Each minute passing by not wasting anything on the screen as the intensity is ever more increasing.

Powerfully stoic, the film is an excursion of poetic beauty leaving a wistful ash rendering of an unapologetic vision.