I've been craving this album as badly as what a junkie craves his first hit of grade-A skag in the morning; it being the first new studio album since 2000's White Pepper.
Ween albums are hard to listen to, not only because of the genres they traverse and their often jarring nature but also because each album makes you redefine exactly what you think Ween are doing. Is it some sort of surreal satire? Are they genuine? ETC? ETC.

quebec is a strange album. It was meant to reflect a return to the "browner" side of Ween, meaning, of course, a return to their propensity for weird, strange music, a la The Pod or Pure Guava.
I was hoping that this meant a return to the horrible lo-fi production of the two aforementioned albums, especially as this is their first album on an indie label after nearly a decade of being on Elektra. I'm not too sure where Ween came up with the money but despite the presence of drum-machines, tape manipulated voices and other such dubious devices, the album still has a very polished sound.
Now I, being a fan of lo-fi music, would normally say that I was disappointed with their decision to spend quite so much time in studios, but Ween are clever enough to know that overproducing album can be detrimental to the music, so they didn't, and I wasn't.
Still, some of the songs are strange, peculiar little concoctions: "Hey There Fancypants" being a jaunty, novelty-esque song, "Happy Colored Marbles" being an odd mix of bubble gum voices and weird carnival-type music, and "Zoloft", a trippy exploration of the drug of the same name.

This is also the first Ween album since Chocolate and Cheese that hasn't focused - albeit vaguely in the case of The Mollusk (it being a semi-prog rock concept album of sorts) - on a single genre of music.
This means that the album is hard to describe - certainly as an entity of its own - because the songs could very well have come off any of the other Ween albums.
The first song, "It's Gonna Be a Long Night", could have as easily opened godWEENsatan: The Oneness as "You Fucked Up" did.
"Chocolate Town" would, with a little tweaking, been very comfortable on 12 Golden Country Greats, much like "Transdermal Celebration" and "Tried and True" would have been on White Pepper.
Ween's predilection for epic type songs is still pretty strong, the album ending with two ballads, "The Argus" and "If You Could Save Yourself (You'd Save Us All)", both of which are absolutely amazing, musically and lyrically.

I'd stopped laughing at Ween a few years ago, right after I realised what amazing musicians they were, though, generally, I still try to spot what type of music they are "lampooning".
This was easy with 12 Golden Country Greats (country music) or White Pepper (60's and 70's pop music), however, with quebec, it's a little hard.
There's "Captain", a slow dirge, featuring only the lyrics "Captain, turn around and take me home." The song certainly sounds familiar, like the sort of thing that has been done before, the sort of thing perpetrated, only seriously, in the past. However, I wouldn't even begin to know where to begin looking for a genuine song of that nature.
The same goes for "Among His Tribe", and "Alcan Road" (another dirge).
As such, I don't know what to make of these songs. They are, by no means, stupid songs, but neither do they seem to be completely free of irony or satire, which brings me back to my earlier question, what are Gene and Dean Ween doing?
Is it possible that, after six years of being a fan, I'm still no closer to understanding exactly what Ween are all about? I mean, is it possible that Ween are becoming even subtler?
I don't know, and I've asked too many questions already.

The best way to listen to this album is to put aside all pre- and half-formed conceptions that you have of Ween and just enjoy the songs, and, as far as that goes, it's a pretty amazing CD. 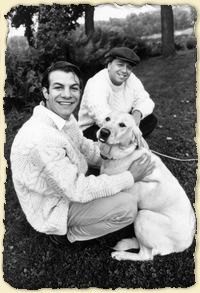 Hey there, fancypants
Play the songs that make us dance
Play the tunes that make the ladies swoon
A song for all the lonely hearts, shattered dreams and broken parts
But it feels like sunny days are coming soon