Minor static on the backing tapes, deep set into the rear of the stage and faces that move while the words aren't coming out or do when they don't. It's lip-synching for the matinee and disappointment served up front. A new Christmas musical and all the songs and voices are creaking out at 10 years in the stew. At least they could turn the volume up.

Colour and all things painted snow and Christmas dress up the stage in a setting that makes no mistake about the subject matter of a relatively new musical production deep knuckled in a new layer.

"I am not paying this much for tickets to not get a programme," says a mother behind a row as she tells her son to get two from the usher quick smart before the start. Children's theatre at adult prices. The air is cool, drying the eyes out nicely and with the dark cover, it's easy to fall asleep. Nothing live in the vocal performance, but the gestures are wild and compensate for songs and lyrics muffled. The programme notes the original cast recording is from 2002.

Counting Santa Claus, there are only three actors on stage without fully body mascot costumes and visible opportunity to sing or talk. Startling then to actually hear the elves use their own voices when they run out into the aisles looking for Mooseltoe, gone wayward after a tripping scene talking with the Mooseking in the visage of a snowy mountain top, antlers and all.

The pantomime is so often out of step with the backing tapes it's distracting. Either ahead or catching up, the actual comedy and entertainment value comes in the wild gestures. From the rotund throwing their guts around or the performers doing costume checks while on stage, less a part of ill-fitting wear and more in character of the scene, it leaves the noises that are circling far in the distance. 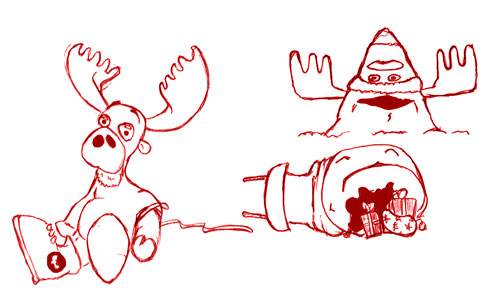 
Mooseltoe's chance to live his dream comes at Blitzen's sickness, suddenly out of the game and putting Santa's Christmas Eve run in jeopardy. In the original reindeer fleet the pull is done by an even eight. They're a close knit group, with Rudolf the Red-Nosed interloper coming in and taking the lead with his mutant nose to make the sled a nine charge crew. With global overpopulation and the need to accommodate more materially obsessed children, even going back to the original eight seems out of the question and hence the need to either scrap Christmas or call in a ringer.

In the real world you cull the team to a smaller and smaller crew, putting them all under stress attacks from the increased workload and stagnant pay of hay and sugar cubes found at the kitchen counter with week-old coffee brewing something you would not even scrap off the toaster grill. But we're not there. We're here in Moosetown, The Arctic Circle. Cue the moose who's always falling over himself to save the day.

Mooseltoe's big dream is to fly like one of Santa's reindeer and help with the delivery of presents. This is the moose's big moment in the sun/shifting moon and they squander it. On visibly thick support rods, you don't really see much of the flying puppet as it's hidden behind a curtain with faint track lighting. A climax undone.

The subtext here for the adults in the audience is clear. When your child has big dreams and is always tripping, don't scoff at them or hate them for wanting more out of life. Let them swap out hard work and realistic goals for dreams and participation trophies and that way leads to rehab and needing to shoot the juice between their toes to avoid having perforated elbows. Or at least having a reputation that precedes you. The residents of Moosetown already know the score and push the young hero on his way or to kick some reality into him.

Mooseltoe: A New Moosical is a bright, colourful production with a stereo system that muffles it with a Hessian sack and beats it with a bag of oranges. The only time they even talk without the backing vocals from 2002 are when they engage directly with the audience in their search for the missing moose. More of that please.

From the wrong angle at the single act matinee performance on 3 December 2011 at The Center for Rural Development in Somerset, Kentucky and a swarm of paper bag reindeer puppets in audience.