Do not take directions from Jason Mraz if you see him on a scooter. He'll lend you some, but they're not necessarily going to be where you want to end up. Peace be with you in your new found journey.

Fake grass banks the upper section of the rear, lush blades of plastic with the shine of a thousand minutes cutting into your face when you roll in it. Then, if you happen to not have your own water bottle after the bar, they'll sell you any drink you like, without the bottle cap. And with the refill stations all around the outside, you're going to need to recycle that bottle later instead of being able to reuse it at home. That's not green "as you like it", but close enough.

Christina Perri starts the night with a jaunty series of ballads that brings a sweet mood to the air. At the pace between fast and slow, it's calm, relaxing. Sombre at times. A lounge around with beads of sweat running into your ear as you fight off the sting of something biting. "A Thousand Years" sees a dad who doesn't want to be there take out his smartphone and have it guess the song from the outro.

And then the whole set knees up for an epileptic jamming over sounds from a European darkness clawing for light. Or at least a gothic head drum. Perri pounds the piano on "Mine", a romp over gargoyles, a lost heart into the kind of dancing you do flailing your legs side to side. The lyrics probably are nothing of the manic undertone, but the happy gloom and doom steers it around from the rest of the love songs. It's a well done contrast and takes it out for the first segment.

The scalp continues to fleck with twitches of phantom insects and real bites. The gentle waft of body odour thick in the stink of a summer concert. Dead air and we're seeing the sun slowly fade out before the roar of roadies setting up and moving the rigging at a moderate click. Arms akimbo, that's where the sweet drip is.

Jason Mraz is out and we're already into the swing of what feels like a Saturday on a Tuesday night. Energy and unabashed fun leak from the pores, the foot gets going and you're watching yourself from bumping into people. Politely of course, we're not savages here. Mraz imbues an all out love affair in the space, his hippie wranglings and getting people to high five each other is contagious. The man knows how to work the crowd.

It's fast out and plucks the here and there mainly from Love Is a Four Letter Word and We Sing. We Dance. We Steal Things. to make the night's bulk. Mraz laments the tough keep of the perfect set list the larger the back catalogue gets but has no trouble with the tapestry. 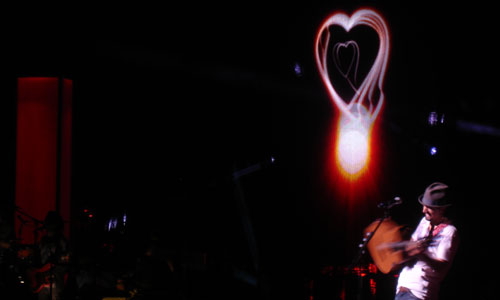 We're on the border of the Ohio River, and there's a nod with the WKRP in Cincinnati theme song and noting the scent of something Kentucky fried in the air as he takes a batch to stage left. Light chatter and we're not wasting time between the songs, we get a better picture of the kind of man Mraz is and his love and green philosophy. The man and his band all have streaks of body and face paint, "because we just like to play," and we're going with that reason.

The first half, exploding with a rambunctious fervour, smoothes out on a classic "I'm Yours" which is when the crowd really takes their voice to play. On one of the softer songs, voices are coming back softly or there's a reverb. It's an echo slight, but there to make you feel like you're walking into a rather ghostly session. That or it's ringing because you've neglected your eardrums for far too long. 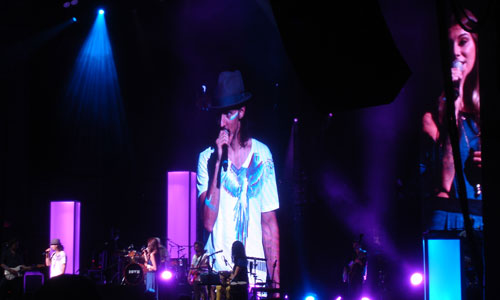 Mraz and Perri connect through "Distance"

Near the close of the second, Christina Perri returns to duet on "Distance" and it's a treat. They work and sing well together, and it tops off the series of duets in the night's playlist.

Still holding all those hearts, Mraz leads all the members from both Perri and Mraz to just continue pushing out this inexhaustible supply of a warm front with a chance of participation.

The progression is finely stitched, taking a rapid beat on songs like "You Fuckin' Did It" and then getting you to swoon hard with something like "I Won't Give Up" that ends the night swaying. Jason Mraz leaves a smile on your face and touches a lightness in your being. Sway, rock your body and lift your soul, Mraz does all that and more. A swell way to wind down after the up and up of hitting those not-jazz sounds.

Six hours there and back to the Riverbend Music Center in Cincinnati, Ohio on Tuesday, 28 May 2012. When the eyes start hitting those crosses, better take the car to the side and rest up a zonk or two.