Living around people drip-feeding on welfare, you notice quick how much they waste away not just the money they inebriate themselves on, but the very fabric of the neighbourhood. Depression is a state of mind and they own premium bonds. Leaving is the only way to find a light, and you know they're not going to do it any time soon.

First few minutes of Fish Tank sets up the entire universe nicely. Vitriol spills from teenage knuckles to reveal the attitude and latitude of the locale, morale, the situation as a whole. A sad lot at that.

Rotting a death of ambition and hope, and a glimmer of something better than this, we're here with Mia (Katie Jarvis). A young chav in a world of chavs surrounding a block of welfare junkies.

Writer/director Andrea Arnold presents the world in a 4:3 ratio, eschewing a widescreen vision to affect a sense of claustrophobia and a definition of class status. The world isn't lavish, it's as-is and less so. Reality fills up with the poor dreams and hopes that wither and die. You don't get a widescreen view when all the TVs still have wood panelling.

Meandering on a broken road to nowhere and down, Mia, along with her mum, Joanne (Kierston Wareing) don't really do anything with their lives. Boozing it up (and Mia being only 15 with a ready source of hooch) is about as much activity they get up to within each other's little orbits. Never mind little Tyler (Rebecca Griffiths), absolutely foul of mouth and loving of her family knit. 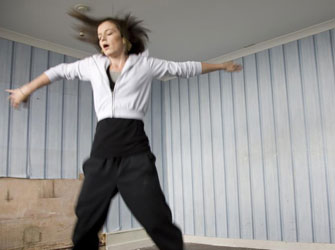 dance till the glass breaks free

Over in some empty room, or possibly an empty flat, Mia regularly tries to escape the dreck and dull of her existence with dance routines set to cut a groove while chugging down more alcohol at each of her sessions. In this little room, facing a world of desolation and despair, her eyes look out and pick up a spark, the want, to be elsewhere. Anywhere, anywhere but here.

Things are fine and boring until mum's new boyfriend, Connor (Michael Fassbender) enters their lives and with it, a sense of impropriety and a swagger. Connor brings with him also, a different set of eyes on their little world. A different perspective that rings a new sense of direction, and quite the turn it does take. 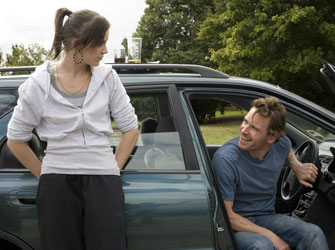 Mia and Connor with a schooner between

Fassbender and Jarvis really defy the presence of an age difference, wide as it is. Chemistry is a dangerous thing, the results which propel the final chunk of time in the seat toward the fade to black. And you don't realise how long you've been sitting there, engrossed.

Times are plentiful on how inappropriate the brooding atmosphere and sense of exit. Balancing a tricky nature between drama, tension and sheer disbelief at the unfolding, nothing really slows down, or speed up. It is, as it is. There and bare.

Fish Tank looks after itself. If your hopes and dreams rely on others, then you're going to be staring at the window for a while longer. Take a chance, change yourself, change your situation, walk out and up. You only have yourself to fall back on.