Someone has ripped off the nipples from one of the specimens. The photo shows one thing, the naked man in his skinned state shows another. That is, two spots on his bare chest where his nipples used to be. You can clearly see the recesses. Other than dust from other patrons, the base of the display is clean, void of any extra skin bits. So that's a souvenir someone's adding to their soup.

As you pay admission, the desk clerks remind you a couple of times, both verbally and a slight nod to the sign, that no photography is allowed. Walk through and the first thing you'll note after the deli-sliced man are the cameras up high, set back a bit in the shadows. Crisscrossing the scope of the floor, they do a pretty good job of covering all the blind spots. They're everywhere and keep a mean eye on all those looking to see how close their hot breaths get to the embalmed figures.

It's a fairly open exhibition with a handful of full body donations standing there, ripped of flesh and baring their muscles, showing their bone structure and their eyes so gone and glassy now. Some are made for sport, riding a bike or taking a swing at bat. For the dead, they look the most uncomfortable. The ones lopped off at the thigh and arms or the one standing with a large testicle the size of a golf ball, they look more relaxed, natural, at ease. 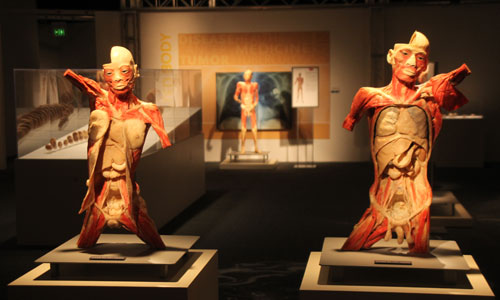 A flank of organs in one of the rooms shout out from their boxes with solid bright dye. Enough to render the looks as plastic, fake. The tendrils spindly and like the excess tabs you break off when building up your model airplane kit.

There's a hint of narrative, in terms of chapters or general stages, as opposed to following the journey of a cell from scalp to sole. The gallery layout then is a refreshing jump from one part to another. Skeletal, digestive, respiratory, muscular and so on. Compartmentalising it as such allows you to fully get a grip on how the organs closely relate and work with each other. At least as the information panels detail.

The room of fetuses is a bit of a shocking one that takes you aback. Tube after tube in various stages of dead babies-to-be, floating there in the solution. Their veins glowing red dye for the show. Eyes, dead to the world but so very much "there" and wanting to stare back. Don't forget to read the warning sign about the potentially disturbing nature when you saunter right on through.

Lighting is a problem in a few sections where they position the lights in the centre against the walls of the organs. Especially so in the pancreas and spleen display (at least memory says those are the organs). Standing over it, the bright bulb behind casts your own shadow to block out the words on the placards. The box goes dark when you step up to it. It's a display you have to come at from the sides or from the far wall, reading the words upside down as you do. And even then you have to hope that another visitor doesn't also walk up and stand there creating another eclipse of information. For the rest of the exhibition, the lights are generally low, keeping spotlights in the cabinets or on the free standing models.

The bodies are preserved with a polymer process using liquid silicone rubber. The bodies are odourless and frozen in state with such amazing clarity in detail. Though it makes the display indefinitely possible, they'll be dumping the bodies into an incinerator at the end of the run.

You can easily blast your time through, failing to savour it. Or you can linger, really see how much detail those pores on the nose really show. The disgusting sight of a lung cut out of a smoker. How long that small intestine really gets to be when you see it all alone on the slab like that. Take your time here, it's a worthwhile afternoon before you head out for a sit down meal.

Bodies Revealed is gruesome, but an oddly fascinating, exhibition on the human body.

Taking the long way around the dead bodies at The Lexington Convention Center in Lexington, Kentucky.